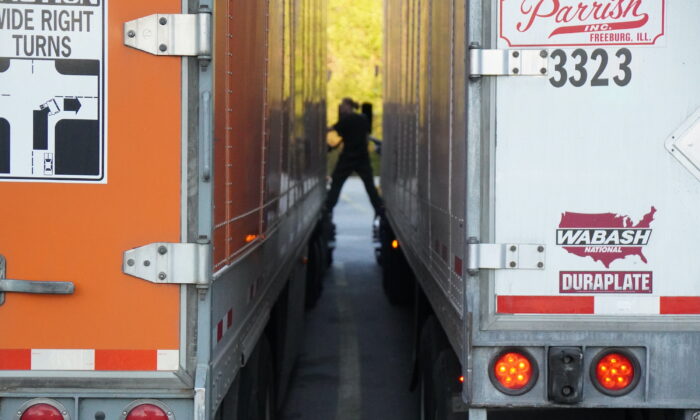 A female trucker stands between rigs while talking at the One9 truck stop in Wildwood, Ga., on Oct. 18, 2021. (Jackson Elliott/The Epoch Times)
Economy

Demand for trucking services has declined notably in the early months of 2022, foreshadowing the likelihood of economic tribulations as the economy roils from inflation, supply chain issues, and interest rate hikes.

On the face of it, the effects of this plummeting demand will be superficially favorable for consumers. After a year in which consumers have suffered from the highest rate of inflation in decades, the lower cost of shipping will likely have a deflationary effect on the prices of goods.

However, in the broader picture, these lower costs of shipping and goods could portend a possible recession, which is likely to follow from lower consumer spending. As the Federal Reserve has increasingly signaled a more aggressive strategy to fight inflation, economists fear that an undesired consequence of higher interest rates could be economic stagnation and a recession.

Since 1972, there have been 12 “trucking recessions,” half of which were followed by broader economic recessions. In the fragile economic environment of 2022, such an event seems likely to many economists.

Throughout 2021, the trucking industry found itself with a labor shortage that put the system under strain to meet demand, resulting in the supply chain issues which have persisted to this day. In the two years immediately following the initial lockdowns from the CCP (Chinese Communist Party) virus, economic stimulus and low interest rates were responsible for high consumer spending and high demand.

As the stimulus wells have dried up, analysts increasingly believe that a so-called “bullwhip effect” could create deflationary economic pressure in response to the current state of affairs.

The trend in the trucking industry is consonant with the overall state of global shipping, which has seen logistics companies charging lower rates to move goods overseas. Data from the shipping logistics company Xeneta attests to lower costs for shipping across major routes, including from East Asia to Europe and the American Northeast.

Throughout the past year, consumer spending has grown significantly, but these apparent gains are neutralized when controlled for inflation, which causes people to spend more to buy the same goods and services to which they are accustomed. Even so, consumer spending remains above pre-2020 levels, even when inflation has been accounted for.

Nonetheless, the plummeting demand for trucking suggests that consumers are tightening their budgets, as essentials such as food and fuel require an increasing share of a middle class consumer’s income.

While any ensuing recession would entail significant economic hardship and scarcity, it would likely also slow down the current rate of inflation.