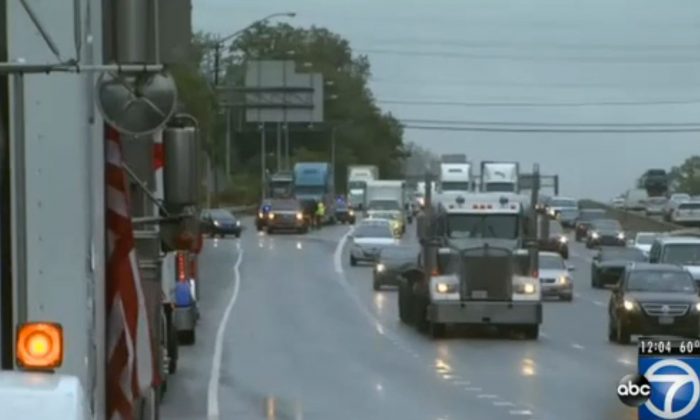 A real photo of the truckers "strike" on the Beltway in the Washington, D.C. metro area on Friday. At least four fake photos are being shared across social media sites that aren't actually from the protest. (Screenshot/ABC)
US

At least four fake photos of the truckers “strike” on Oct. 11, 2013 are being prominently shared across Twitter and Facebook.

The photos all show trucks supposedly in or on their way to Washington, D.C. to participate in the planned three-day protest, called “Truckers for the Constitution.”

Dozens of trucks drove for hours on the Beltway in D.C. and Virginia on Friday. The thousands that organizers spoke of didn’t appear, but the protest is scheduled to run through Sunday night.

While traffic was slowed somewhat by the convoys of truckers–particularly in the morning–by the evening rush hour it appeared that many of the truckers had pulled out.

Epoch Times was able to confirm at least four fake photos being circulated on Facebook and Twitter that are not of the protest today.

What appeared to be the most shared photo, showing a convoy of trucks taking off on a two-lane highway, presumably on its way to the protest, with people cheering on the roadside, is actually from a Make-a-Wish Foundation event in May.

Another photo, showing a lighted truck that has an American flag on the side, appears to be from 2012.

The two other photos appear to be false because it rained in the Washington D.C. metro area today, and the photos show dry pavement and clear skies.

See the photos below, and real photos of the protest here