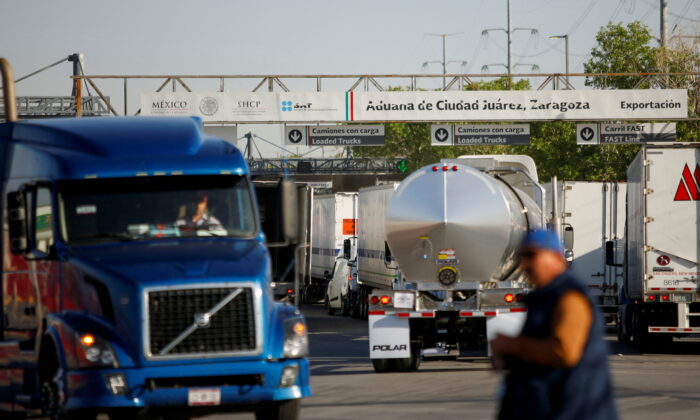 Trucks wait in a long queue to cross into the United States after the Texas Department of Public Safety announced increased security checks at the international ports of entry into Texas, at the Zaragoza-Ysleta border crossing bridge in Ciudad Juarez, Mexico, on April 9, 2022. (Jose Luis Gonzalez/Reuters)
Texas

The government of Mexico announced its displeasure at the new rules, warning that around two-thirds of normal trade between the two sides was being held up, resulting in the loss of “significant revenue” for Mexican and American businesses. At one bridge connecting Reynosa, Mexico, with Pharr, Texas, truckers parked their vehicles on the Mexican side and held barbecues at the spot.

“Yesterday it took me 17 hours to cross into the United States and return,” Raymundo Galicia, a Mexican driver protesting at the Santa Teresa bridge connecting San Jeronimo, Chihuahua, to Santa Teresa, New Mexico, said in a Reuters report published on April 12. “I get paid the same whether it takes me an hour or ten hours to cross, so this is affecting us a lot.”

The Pharr bridge typically sees around 3,000 trucks pass through daily and is the largest land port for food produce entering the United States. Roughly two-thirds of produce sold in Texas comes from Mexico.

Although Texas state troopers have always inspected trucks crossing into the United States, they have “never, ever, ever” acted in a manner that ended up holding up “a complete system or a complete supply chain,” said Joe Arevalo, owner of Keystone Cold, cited CNBC.

“We’re living through a nightmare, and we’re already suffering through a very delicate supply chain from the pandemic and to try to regrow the business,” Arevalo said.

Abbott had ordered vehicle inspections to uncover the smuggling of people and contraband by criminal cartels. However, traffic delays have attracted criticism from several quarters, including from his own Republican Party members.

According to John Esparza, president and CEO of the Texas Trucking Association which represents 1,000 members, his phone has been ringing off the hook since April 7 following Abbott’s orders.

“Without a doubt, it is a major concern for all of us currently,” Esparza said to The Epoch Times. “Regardless of what causes the slowdowns, when we see slowdowns at the border, it has a down-the-food-chain effect … all the way to the grocery store.”

Dante Galeazzi, CEO and president of the Texas International Produce Association, also sent a letter to the governor, requesting Abbott to modify the enforcement action. He foresees companies shifting business to Arizona or New Mexico due to the new rule.

However, some Texan business owners support Abbott’s orders despite the inconvenience. The rule will be for the good of the community, Barbara Carrasco, co-owner of Trans-Logistics international, said in an interview with media outlet News4SA.

“We are willing to make a sacrifice because we understand the predicament our country is in, our sovereignty is at stake and we see that they are finding illegal immigrants on 53-foot vans and these people need to know that this is not acceptable behavior.”