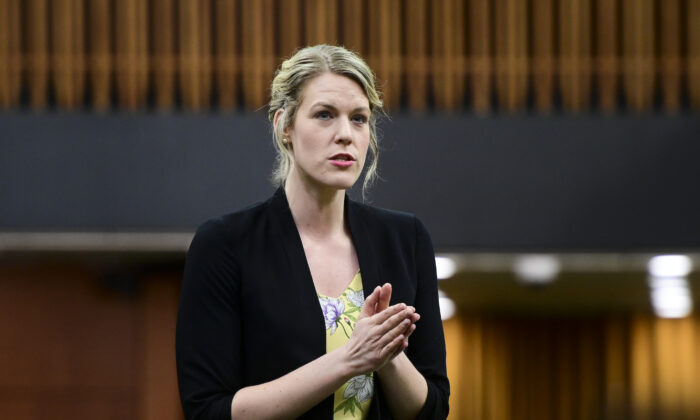 Conservative member of Parliament Rachael Thomas rises during question period in the House of Commons on Parliament Hill in Ottawa on June 4, 2021. (The Canadian Press/Sean Kilpatrick)
Canada

Truckers Are Hard-Working Canadians, ‘Deserve to Have a Voice,’ Says Tory MP Thomas

Truckers protesting in Ottawa deserve to have their voices heard and Prime Minister Justin Trudeau’s refusal to meet them shows a disregard for democracy, says a Conservative MP.

But Trudeau appears unwilling to hear their voices or give weight to their concerns, added Thomas, who represents the Lethbridge riding: “He is willfully turning a blind eye and a deaf ear to the situation that is taking place in Canada.”

In a press conference on Jan. 26, Trudeau dismissed the protesters as being a “small fringe minority” who do not hold the views of the majority of Canadians.

“The small fringe minority of people who are on their way to Ottawa, or who are holding unacceptable views that they’re expressing, do not represent the views of Canadians who have been there for each other,” he said of the convoy that arrived in Ottawa on Jan. 29.

Trudeau’s denouncement of the protesters has continued since they arrived in the nation’s capital while refusing to meet them.

“Canadians have the right to protest, to disagree with their government, and to make their voices heard. We’ll always protect that right. But let’s be clear: They don’t have the right to blockade our economy, or our democracy, or our fellow citizens’ daily lives. It has to stop,” he posted on Twitter on Feb. 7.

Thomas said the number of protesters and supporters of the movement is significant and not to be ignored.

“We’re talking about tens of thousands of people who have gathered on Parliament Hill over the last [two weeks],” she said. “There are hundreds of thousands of Canadians who are standing behind them.”

Dubbed the “Freedom Convoy,” the protest started as a demonstration by truck drivers opposing federal COVID-19 vaccine mandates for cross-border travel. It has since become a larger movement as many Canadians from across the country have joined in or voiced their support to ending various COVID-19 mandates and restrictions.

Thomas, who has been on Parliament Hill most of the time since the protestors arrived, dismisses the prevalent narrative from legacy media and some political figures that the truckers are creating chaos in the city.

“I’ve had the opportunity to walk around, to see with my own eyes what is going on, and some of the observations that I have made, would be that this group is here with positive intention, with good intention,” she said.

Thomas said all that the truckers want is “a return to normal,” and to see “freedom return” from the COVID restrictions that adversely impacted their lives for the past two years.

In a tweet on Feb. 8, Trudeau said Canada has to “keep listening to science” before the country can be safely reopened.

Thomas countered that Dr. Theresa Tam, the country’s Chief Public Health Officer, announced on Feb. 4 the need to reassess all existing COVID policies, including vaccine passports, in order to find a “sustainable” way of dealing with the pandemic.

Thomas said even though the trucker protest might have caused some disturbances to the residents in Ottawa, the protesters have been peaceful and respectful ever since they started the demonstration.

“They are exercising their democratic right to do so in a peaceful manner,” she said. “This is Canadian standing up for Canadian. This is about freedom. This is about defending democracy. This is about holding the government to account.”