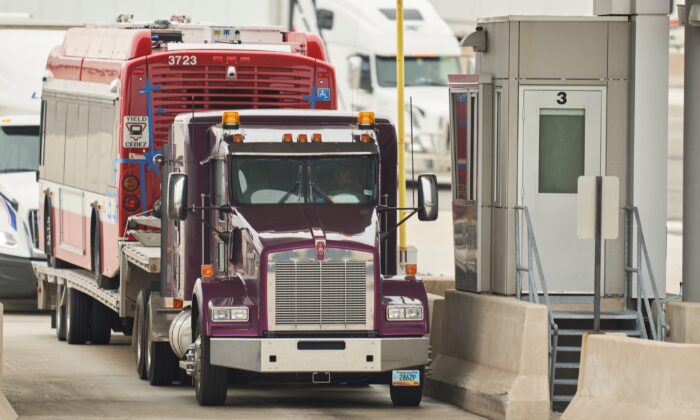 A trucker waits at the Canada Customs booth in Sarnia, Ont., on March 16, 2020. (GEOFF ROBINS/AFP via Getty Images)
Canada

Canada’s trucking industry is grappling with a host of pressing issues that have been exacerbated by the pandemic, with industry stakeholders warning of driver shortages, high turnover rates, and undesirable working conditions.

“We had a significant truck driver shortage prior to COVID and it’s only been made worse by the crisis,” Stephen Laskowski, president of the Canadian Trucking Alliance (CTA), told The Epoch Times.

In the United Kingdom, a lack of truck drivers has led to widespread fuel shortages, with gas stations running dry because there aren’t enough drivers to deliver.

Laskowski says Canada’s shortage is now between 20,000 and 30,000 drivers. By comparison, the UK reportedly faces a shortage of 90,000 drivers. Canada’s population stands around 38 million while the UK’s is about 68 million.

The UK situation came about due to the pandemic, an aging workforce, and Brexit, with foreign workers in the transport industry leaving the country following Britain’s departure from the EU last year.

Much like in the UK, the trucking industry in Canada is in desperate need of younger and foreign workers to replace its aging workforce, Laskowski says.

“Our workforce has the largest percentage of people over the age of 55. When you have a high percentage of your workforce close to what we call retirement years, a lot of them just said during the COVID crisis ‘You know, it’s time,’ and they’ve retired,” he said.

Transport companies are trying to find ways to attract younger drivers “but there’s only so much you can do,” Laskowski says, noting that the job will always require travelling long distances and long hours away from home.

Nevertheless, the CTA will launch a campaign this month to attract a younger generation to the trade.

Laskowski notes that the industry is also facing an equipment supply crisis, with trucking companies having trouble acquiring new tractors and trailers due to shortages.

“There are real challenges in the supply chain with regards to both labour and equipment challenges,” he said.

According to logistics magazine DC Velocity, tractor and trailer shortages will linger for at least another year due to equipment backlogs.

Nicholas Emond, vice president of the Centre de Formation du Routier de Montréal, a driver training school in the Montreal area, says the school trains 2,000 to 2,500 truck drivers every year. Attendance is currently at normal levels, but a shortage of trainers and test administrators to assess new drivers and issue licenses is an obstacle to putting more drivers on the road, he says.

But Emond believes the core issue faced by transport companies relates more to a high turnover rate and the resulting lost training costs than driver shortages.

“There’s a cost to train a new employee for a specific task, and people go elsewhere for a one-dollar raise. They jump from here to there. I think that’s the main problem,” Emond said in an interview.

Driver retention and attracting new drivers remains a challenge because most transportation businesses operate from an “old school” model and need to recognize new labour market realities, including that the younger generation want a better work-life balance, he notes.

“It’s getting harder to convince someone to do long distance,” Emond said.

A recent survey of trucking and logistics businesses found over 75 percent of employers said they expect a driver shortage to be a challenge in the next six months, with over 50 percent indicating that it will be their top challenge, according to Trucking HR Canada, a national non-profit organization.

The organization said the pandemic has thrust a wrench into many transport businesses stemming from factors such as decreased revenue, new health and safety regulations, supply chain backlogs, fluctuating demand for their services, rising input prices, and changing workforce needs.

While not putting the onus on the government to solve the industry’s pains, Laskowski says support is needed through better funding for training, facilitating the immigration of truck drivers through employer programs with companies that follow labour standards, and cracking down on the “underground economy,” such as the “unscrupulous carriers” that lure drivers away from reputable companies by offering to pay in cash.

Jim Leis, a former business executive who’s been a truck driver since 2013, sees government subsidies as one of the biggest problems in the industry.

Leis explains that the government is helping to inject a high number of drivers into the workforce through job retraining programs, which exerts a downward pressure on wages. This in turn negatively affects the appeal of the trade and the retention of drivers.

“One of the first things that’s really structurally wrong with the trucking industry is that the government is subsidizing it,” he says.

In recent years, wages have been too low to attract drivers and keep them, unlike in past decades when the money was good, Leis said.

“If you talk to any number of drivers they would tell you what I’m telling you—it’s hardly worth being in the trucking industry as a driver,” he said, adding that issues such as time away from family and long hours on the road in often dangerous conditions are also a turnoff.

“Most people don’t want to be a truck driver in today’s age.”