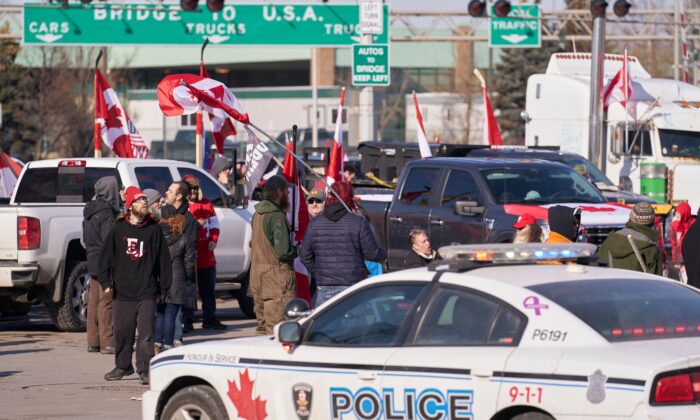 Protesters demonstrate against COVID-19 mandates and restrictions during a blockade of the Ambassador Bridge border crossing in Windsor, Ont., on Feb. 9, 2022. (Geoff Robins/AFP via Getty Images)
Viewpoints

Or in the immortal words of Ontario Premier Doug Ford: “The cheese is slipping off the cracker.” That would be the same Doug Ford who just declared a “state of emergency” to deal with a few hundred big rig truckers blocking  key Canada-U.S. border crossings. Some cheese. Some cracker.

Ford, and the other media-politicos ki-yiiiing that the truckers’ protest risks “wrecking the economy,” seem to be under some quasi-hallucinatory spell that casts the truckers protesting as the source of the problem. In reality, the truckers are protesting because they have a problem to protest.

Short of mass psychiatric intervention for our approaching-delusional-liftoff leaders, maybe what we need is for the Office of Clear-Eyed Understanding of Cause and Effect to restore a sane distinction between symptom and disease.

Yes, of course, the truckers’ blockades are economically disruptive. Maybe they’re even as consequentially dangerous as predicted. We can agree they should end. But surely, after two years of non-stop COVID, it should be second nature for us that the itch and the scratch are not the illness.

Or are we so far gone in amnesia about the underlying malady that made the truckers mad enough to roll cross country in convoy? Do we forget what prompted them to block the streets of Ottawa, the bridges of Windsor-Detroit, and other pressure points? Is the media-politico cohort’s imposition, and increasingly feckless justification, of pandemic public policies lost in the mists of memory? Have we lost the thread of free citizens suffering under senseless state edicts?

Wreck the economy, you say? In the immortal words of Randy Newman: “Where are we? On the moon?”

Who devastated economic life lockdowns that came down like the iron heel of two-tonne boots on vulnerable members of the working class? Who threw millions of service workers out of work? Who drove federal and provincial debt to the borderline of catastrophe by paying workers to stay home rather than investing in health care to spare us overwhelmed hospitals?

Hint: It wasn’t the truckers. They were too busy crossing Canada and its borders to keep supply lines open. Here’s a partial list of other things the truckers didn’t do:

All these, and many more, were the doing of the political class. The media class relentlessly cheered on such measures while abandoning its basic question-asking function. And the truckers are the problem?

No. The trucker “problem” was resolvable on Day One by Prime Minister Trudeau promising to drop cross-border vaccine mandates. The air would have gone from the convoy’s tires with a timeline setting out when other federally imposed affronts to liberty will cease. As Liberal MPs have protested, the prime minister chose instead to play cynical wedge politics. His scurrilous behaviour supports Conrad Black’s contention of his unfitness for office.

Yet focusing all attention on him is myopic. The deeper problem is a political-bureaucratic-media bolus that is entrenched and divisive. It acts from a sense of its entitlement to control the commanding heights of right argument, giving it the prerogative to decide the elect and the outcast. In the immortal words of King Lear on his way to the crazy place: “That way madness lies.”

Being an eternal optimist, however, I believe in restoratives. Politically, the prescription is repeated waves of electoral cleansing, sometimes described in the politico-nostrum handbook as “throwing the bastards out.” The key is continual doses. Party partisanship must give way to the “one term and you’re gone” solution until we restore democratic balance.

Likewise, pressure must be applied to incoming administrations to turn senior public service sinecures into ejection seats. Mandarins, being a species of weasel, fear most the knock on the office door followed by: “Here’s a banker’s box for your things. The escort out of the building awaits.”

As for legacy media egomania, well, the poor darlings have two feet in the grave anyway, don’t they? Patience might prove a virtue. When it does, let’s remember the catalytic converter was Canada’s truckers who went about, in the immortal words of the great Tom Waits, “blowin’ their horns in every window in town.”