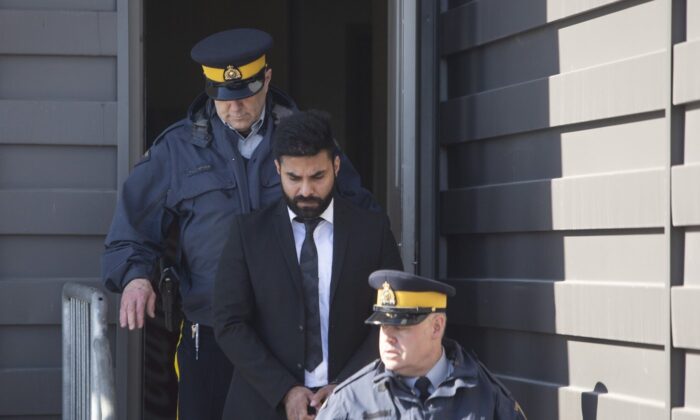 Jaskirat Singh Sidhu is taken out of the Kerry Vickar Centre by RCMP following his sentencing for the Humboldt Broncos bus crash in Melfort, Sask., on March, 22, 2019. (The Canadian Press/Kayle Neis)
Canada

A former truck driver who caused the deadly Humboldt Broncos bus crash has lost a first step in his effort to stay in Canada.

Jaskirat Singh Sidhu tried to make the case to the Canada Border Services Agency to stay in the country after serving his prison sentence.

His lawyer, Michael Greene, says that the agency has rejected Sidhu’s submission, and his client is “devastated.”

A spokeswoman for Immigration Canada says the matter has been referred to the immigration division for an admissibility hearing, which would make the decision on deportation, but it has not yet been scheduled.

Sidhu was sentenced to eight years after he pleaded guilty to dangerous driving causing death and bodily harm in the April 2018 crash that killed 16 people and injured 13.

Court was told Sidhu, a newly married permanent resident, went through stop sign at a rural Saskatchewan intersection and drove into the path of the Humboldt Broncos bus carrying players and staff to a junior hockey league playoff game.

Greene says he is also considering challenging the decision by the Canada Border Services Agency in federal court.