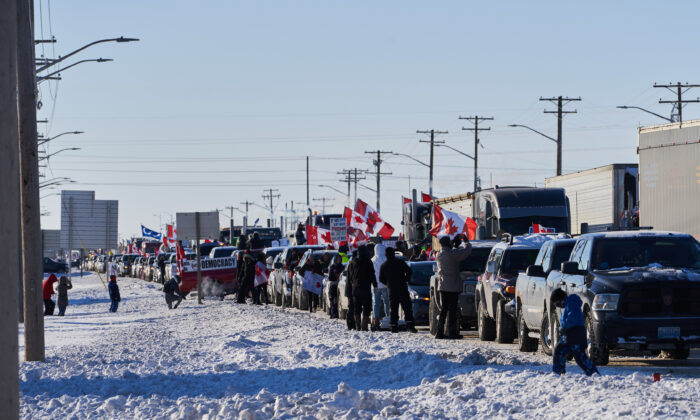 Supporters of Canadian truck drivers protesting the COVID-19 vaccine mandate cheer on a convoy of trucks on their way to Ottawa, on the Trans-Canada Highway west of Winnipeg, Manitoba, on Jan. 25, 2022. (David Lipnowski/The Canadian Press)
Canada

It was a long time in coming, but we are now seeing a large and widespread protest effort in opposition to government pandemic mandates. As restrictions and mandates drag on, it was inevitable that large numbers of people would eventually start to organize and push back. Who would have thought that the protest would come in the form of a massive convoy of trucks though?

While the “Truckers for Freedom” convoy began as a relatively small action on behalf of unvaccinated truckers who could no longer cross the border due to a new federal vaccine mandate, it has quickly morphed into something far beyond that.

Canadians were hungry for some form of protest against government pandemic restrictions and the convoy has provided them with it. The growth of this movement in such short order has been stunning to behold. Over 600,000 supporters have joined the Facebook group for the convoy while nearly 70,000 donors have contributed well over $5 million to support the cause. These numbers continue to grow by the minute and the convoy is still days away from Ottawa.

This viral (pardon the pun) protest is expanding in scope so quickly, it really is difficult to determine just how big it is. While the main convoy began in B.C., two other routes are planning to meet up with the main convoy in Ottawa, starting from both Eastern Canada and Southern Ontario. Videos and rumblings on social media suggest some U.S. truckers are driving up to support the effort as well. We really don’t know how big this thing is going to be until they reach Ottawa. It’s safe to say it will be like nothing Canadians have ever seen before.

Thousands of people who can’t join the convoy have been coming out to cheer it on as it passes through their cities. In Winnipeg, local Hutterites who usually avoid participation in politics came out to provide food for the participants. This singular protest is something far beyond a simple group of truckers who want the right to eschew vaccinations.

Opposition to the convoy has been swift, vitriolic, and almost panicked. Former Trudeau advisor Gerald Butts put out a series of tweets trying to imply that the convoy was nothing but a western separatist effort created in order to raise funds for a political party. As the convoy spread across the nation, it became clear that this was not just a regional effort.

Legacy media has continually reported that GoFundMe has frozen the account for the convoy. While there are some requirements for organizers to meet before the funds are dispersed, there is no issue with the account and there is no malfeasance happening. The site is still receiving funds and they will be released. Many are trying to foster mistrust in the movement in hopes of reducing people’s willingness to donate to it. That effort is clearly failing.

Legacy media has also managed to ferret out some extreme statements made by fringe individuals on social media and is trying to use them to paint the convoy as being potentially dangerous and populated by white nationalists. If anything, these insulting insinuations about the supporters of the convoy are only galvanizing support among participants. The tired old race card is failing.

Politicians are divided across the nation on the convoy. Premiers Jason Kenney and Scott Moe have expressed support while other premiers have remained silent. Conservative leader Erin O’Toole has refused to take a definitive stance on the convoy while many of his MPs are openly in support of it.

The convoy is now making international headlines and even Donald Trump Jr. has commented in support of it.

We really don’t know what this protest convoy is or what it will lead to. We have never seen anything like it in Canadian history. It is purely grassroots and doesn’t seem to have any central leadership. The plan for what happens once the convoy reaches Ottawa appears murky. How long will they stay? How much will it congest the city? How will authorities react?

All we know for sure is something massive and unprecedented is happening. The establishment is clearly worried about this and doesn’t know how to react. Citizens are excited and eager to support this challenge to the establishment.

Time will tell if this protest convoy manages to force the government to back down on any mandates. The convoy has already made it clear that opposition to and exhaustion with government restrictions is shared by much more than a tiny fringe minority of Canadians. Once this convoy is finished, we can rest assured that other protests will sprout up. The dam has broken and citizens are no longer passively standing by.

History will be made by the truckers convoy this weekend. Let’s hope it is done in a positive way.