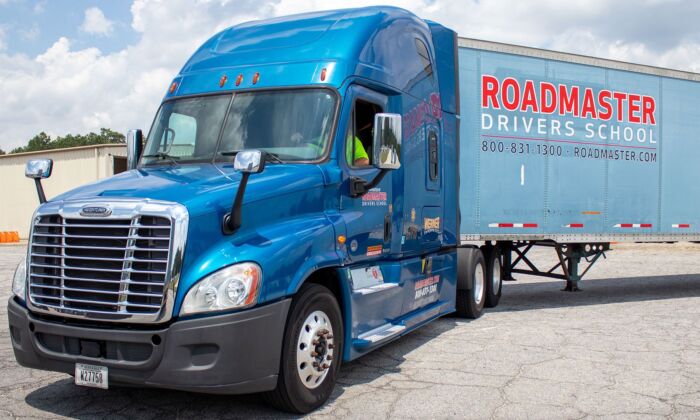 Throughout the COVID-19 pandemic, many considered long-haul truck driving to be the ultimate in social distancing.

There was freedom to be found in wide-open spaces and winding roads amid stifling lockdowns and theoretical flattening of curves.

In 2021, tractor-trailers are still king of the road, despite a growing nationwide shortage of drivers numbering in the tens of thousands.

STDT, which has two campuses in Arizona and one in Nevada, currently boasts hundreds of new students this year who are seeking to earn their commercial driver’s license (CDL) and get straight to work after graduation.

Total enrollment at STDT this year exceeds 1,400, compared to 1,200 a year ago, Strong told The Epoch Times.

“We’re definitely seeing a good number of folks wanting their commercial driver’s license. I think what’s fueling the interest is the training is short—four to eight weeks—and the entry level is pretty high,” he said.

There are currently more job openings than there are truck drivers, Strong said. Because the average age of a truck driver is 52, retirement counts as a leading factor fueling the worsening shortage of drivers, which numbers close to 100,000, according to the American Trucking Association.

In most cases, an STDT student can expect to have a job waiting for him or her following successful completion of the program. Nearly 15 percent of graduates this year are women, Strong said.

“Not many drop out. Some [graduates] want to see the country. Some want to drive locally” and enjoy quality time with family, he said.

At Roadmaster Drivers School, which is based in St. Petersburg, Florida, President Brad Ball said interest in the four-to-five-week program has never been greater.

“Yes, we have seen an increase in folks interested in the program over recent years, especially with all of the supply chain news and carriers offering historic increases in pay and bonuses, improving driver routes,” Ball told The Epoch Times.

“We do have a waiting list at some of our school locations in the busiest markets, but not at our Phoenix location. Classes start every Monday, but it takes a week or two to get through the enrollment process and become scheduled for a start date,” he said.

The interest in becoming a CDL-licensed truck driver is “definitely there,” Ball said. “The opportunity is better than it’s ever been. Many [graduates] have multiple job offers.”

Aside from the freedom of the road, truck drivers receive many career benefits, including starting pay that averages up to $50,000 per year. And with truck drivers being in such great demand, job security is almost guaranteed, he said.

Drivers in many cases receive generous medical insurance and retirement benefits, paid vacation and sick time, as well as the option of taking their pet with them.

“You get to see the country.”

Ball said Roadmaster programs average 12 students per week at the Phoenix location. Students also have access to the latest in tractor-trailers and equipment and technology, he said.

“Truck driver training is hands-on. You need to see, feel, and touch the trucks,” Ball said. “It’s like driving in a small apartment.”

The 2016 Freightliner Cascadia truck, for example, ranks among the largest in its class. The custom sleeper cab comes with a television, a full kitchen with microwave and refrigerator, shower, bathroom, bed, and storage space.

Another big semi-truck is the ARI Legacy and Volvo Big Bunk AT GATR B147. This sleeper cab has all of the bells and whistles of the 2016 Freightliner Cascadia, along with an office desk and table with seats.

Ball said: “Most of our students are 21 and above. When they graduate, they will already know who they are going to work for.”

He said the shortage of drivers is a serious and ongoing problem, and “if nothing changes, we could see [a shortage] of 200,000” drivers going forward.

The government’s COVID-19 vaccine mandate for companies with more than 100 employees is also a “big problem” for the trucking industry, he added. The OSHA mandate is set to go into effect on Jan. 4.

“There are lot of [drivers] that will quit a larger company and go on. I think it is the worst time to be putting in a rule like that,” Ball said.

Even so, demand for truck drivers remains “at an all-time high,” said Steven Gold, founder of 160 Driving Academy, the nation’s largest commercial driving school with more than 100 locations nationwide.

“Almost everybody is saying, ‘I want a better opportunity and make more money,'” Gold told The Epoch Times.

Many are now finding opportunity in abundance in long-haul truck driving. But first, they need the training and experience before they can expect to draw $100,000 salaries a year or two after graduation.

With 20,000 students enrolled this year, Gold expects that number to nearly triple next year because of the increase in demand for CDL licenses among both men and women, representing many population demographics.

Some drivers eventually move on from starting as a company employee to becoming an owner-operator, an expensive prospect, he said.

“Very few are going to do that. You need some driving experience before you buy a $150,000 piece of equipment,” Gold said. “It’s an expensive proposition, a sometimes dangerous proposition. We tell everybody to go work for a big company first.”

Gold said about 12 percent of the students at 160 Driving Academy—and a quarter of the instructors—are women, who tend to be “more careful drivers.”

Cathy Roberson, president of Logistics Trends and Insights in Georgia, said that while the increasing number of graduates of tractor-trailer driving schools is a positive sign, “it’s going to take time for the number of graduates to put a dent” in the national shortage of drivers.

“We’ve had this tractor-trailer driver shortage well over 20 years. I don’t think it’s going away. I don’t think we can satisfy demand” any time soon, she told The Epoch Times.

“I don’t really see them being able to fill the demand [although] every graduate is a plus.”

Freedom and money aside, long-haul truck driving is an often hard and lonely job.

“It’s not for everybody,” Gold said.