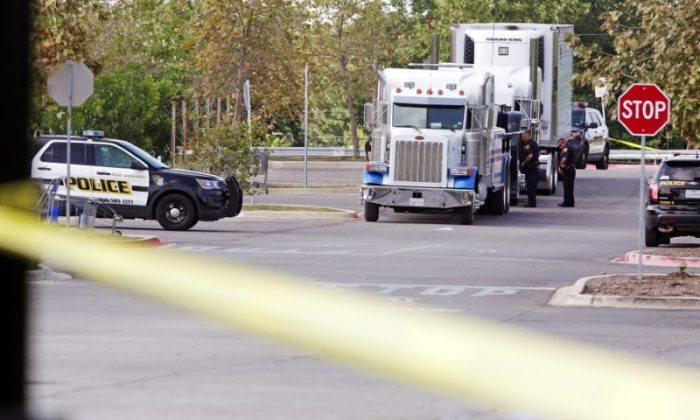 Police officers work on a crime scene after eight people believed to be illegal immigrants being smuggled into the United States were found dead inside a sweltering 18-wheeler trailer parked behind a Walmart store in San Antonio, Texas, U.S. July 23, 2017. REUTERS/Ray Whitehouse
US

A truck driver could face the death penalty or life in prison over the deaths of 10 migrants who he was illegally transporting in sweltering heat in San Antonio, a federal court charged in a complaint on Monday, July 24.

James Matthew Bradley Jr., 60, was arrested on Sunday after police discovered eight men dead along with dozens of migrants, including children, suffering from dehydration and heatstroke in the cargo of his 18-wheeler parked in the back of a Walmart.

Two people later died at hospitals. Some of the immigrants came from Mexico and some from Guatemala. Temperatures reached 100 degrees Fahrenheit on Sunday.

Bradley told investigators that he didn’t know that anyone was in the truck until he parked at Walmart to use the bathroom.

The driver appeared briefly in court and was charged with knowingly transporting illegals in the country or having “reckless disregard” for that fact.

Bradley said that he was driving the truck from Iowa to Brownsville, Texas, to deliver it to the new owner. He said he heard banging and shaking when he parked at Walmart.

The driver said he was surprised as “Spanish” people rushed at him when he opened the doors, knocking him down. He saw 30-40 people get out and scatter. He noticed “bodies just lying on the floor like meat.”

Bradley called his wife but not 9-1-1, according to court documents, Reuters reported. Police found him inside the truck when they arrived.

The complaint also included summaries of interviews with people inside the truck. One said conditions became so unbearable inside the pitch-black interior that people took turns to breath through a hole in the vehicle’s side. Others passed out.

The immigrants, who were not named in the complaint, all described getting on the truck at various points on the U.S. side of the border. One said 70 people were already inside when he got on, while another estimated the total at 180 to 200 people.

Six black sports utility vehicles were waiting outside the Walmart when the truck doors were opened, one rider said, and some of the immigrants quickly “swarmed” the SUVs. That contradicted the account of Bradley, who told investigators he did not see any vehicles waiting to pick up passengers.

San Antonio Police Chief William McManus said video footage showed several other vehicles coming to pick up people who were inside the truck.

Pyle Transportation, which owned the truck, confirmed it was sold a month ago and Bradley was hired to take it to Brownsville, according to a person answering the telephone at the company, who declined to give her name.

Mexico’s government said its consul general in San Antonio was working to identify the victims’ nationalities.

U.S. President Donald Trump, a Republican, has vowed to crack down on immigrants living in the country illegally.