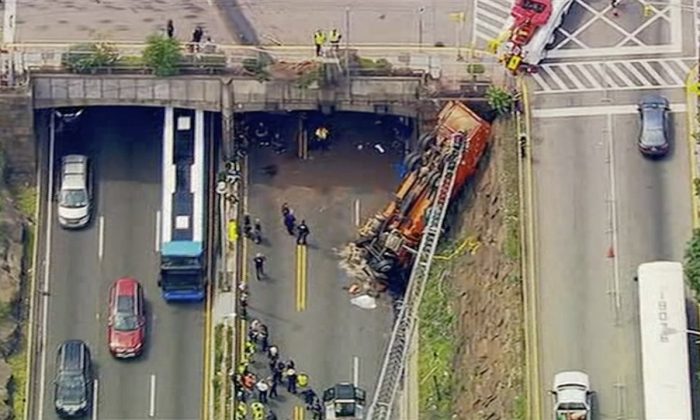 First responders work the scene after a garbage truck careened off an overpass onto the westbound lanes of Route 495, in Union City, N.J., on July 3, 2019. (WABC-TV via AP)
US News

Truck Crash Snarls Commute out of NYC on Eve of Holiday

UNION CITY, N.J.—An overturned garbage truck has blocked a major route out of New York City during the evening commute before the Fourth of July weekend.

The orange truck lay upside down on July 3 on an embankment on the New Jersey side of the Lincoln Tunnel.

New Jersey-bound vehicles are being held at the tunnel as crews work to clear the truck.

Officials say that they are assessing the number of injuries but that one person is in critical condition.

They say passengers from New York should use PATH, New Jersey Transit, and ferries to cross the Hudson River into New Jersey.

They say drivers should use the Holland Tunnel as an alternate route.