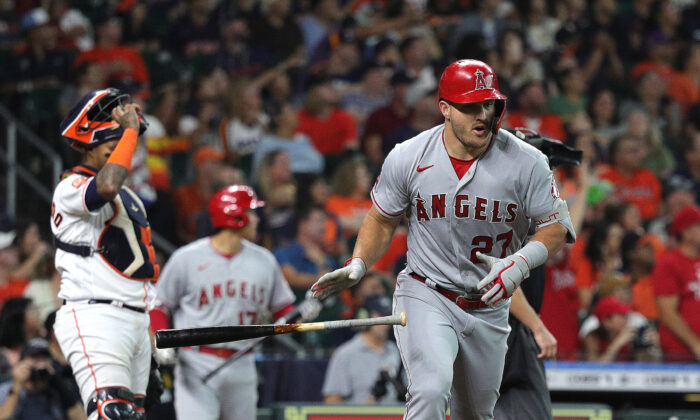 Mike Trout (27) of the Los Angeles Angels hits a three run home run in the second inning against the Houston Astros at Minute Maid Park in Houston, on Sept. 10, 2022. (Bob Levey/Getty Images)
Baseball

Trout hit his 34th homer, a three-run drive to left field in the second inning.

The three-time AL MVP broke the club mark of five games in a row with a homer set by Bobby Bonds in 1977.

Ken Griffey Jr., Don Mattingly and Dale Long share the major league record of eight games in a row with a home run.

Ohtani (12–8) yielded one run on six hits with seven strikeouts until leaving with a blister on his right index finger. The right-hander has allowed three runs or fewer in eight straight starts.

As Ohtani was warming up to start the sixth, he motioned to the dugout, and interim manager Phil Nevin and a trainer came out to check on him. After conversing for several minutes, Ohtani walked off and was replaced by Jimmy Herget.

Ohtani remained in to hit to start the seventh, but Jo Adell batted for him in the ninth.

The Angels jumped on Houston starter José Urquidy (13–6) for five runs in the first two innings. He allowed a career high-tying six runs on 10 hits with four strikeouts in five innings.

Taylor Ward, who finished with three hits, had an RBI single in the first. Mike Ford had an RBI double in the fifth and Andrew Velazquez had an RBI groundout as part of the four-run second.

Jose Altuve scored on a single by Yuli Gurriel and an error in the first. Gurriel had three hits.

C Kurt Suzuki was activated off the bereavement list. C Chad Wallach was optioned to Triple-A Salt Lake to make room for Suzuki.

Astros CF Chas McCormick robbed Ohtani of extra bases in the first with a running catch as he crashed into the wall. In the fourth, Angels LF Mickey Moniak robbed Jeremy Peña of a hit with a diving catch then proceeded to double off Trey Mancini at first.

Trout denied Yordan Alvarez of extra bases to end the fifth, running back on a deep flyball to center and reaching over his head to make the catch.

Angels: 2B David Fletcher exited with a right hand contusion after being hit by a pitch in the first inning. X-rays were negative, and he was listed as day-to-day.

Utility player Aledmys Díaz (groin) continued his rehabilitation assignment with Triple-A Sugar Land on Saturday, with the “tentative” plan for him to rejoin the Astros in Detroit on Tuesday, Baker said.