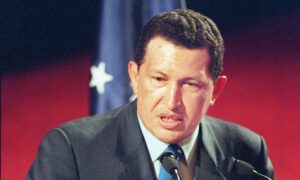 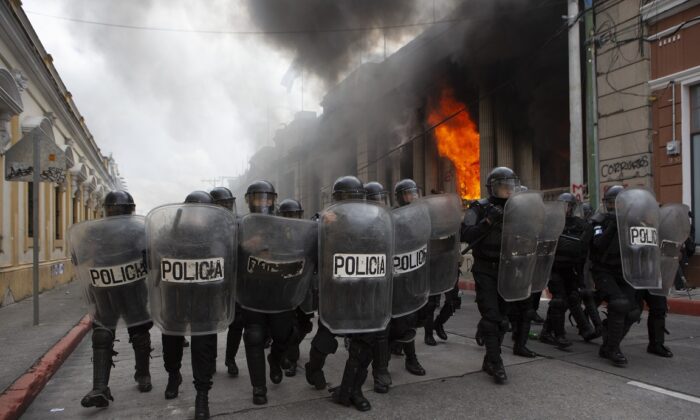 Riot police form a cordon as flames shoot out from the Congress building after protesters set a part of the building on fire, in Guatemala City on Nov. 21, 2020. (AP Photo/Oliver De Ros)
Viewpoints

This remined me of the time I was in Mogadishu in Somalia when the staff of the United Nations High Commission for Refugees went on strike during a cholera epidemic because of the smallness of the portions in their staff canteen (their other grievance being that the government was trying to force them to exchange their Swiss francs for Somali shillings at the official rate, which was but a fraction of the black market rate).

It is true that the extra subventions for congressmen’s meals in Guatemala was, in both the relative and absolute sense, a very small item in the country’s budget, but how was it that professional politicians were unable to understand its symbolic significance?

Is it that any political class soon becomes so cut off from the rest of the population that it ceases to be able to imagine the response to what it does? Or is it so confident in its powers of repression that it does not care?

Anyway, I could have wished, from the purely aesthetic point of view, that the demonstrators had tried to burn other buildings in Guatemala City than the Congress, for example the two concrete towers of positively Soviet hideousness that loom over the cathedral there.

The demonstrators were protesting also the corruption of the congress, and surely one can easily imagine the sink of corruption (not only financial, but moral and intellectual) that must have been necessary for permission to have been given to erect these monstrosities. They would have made a worthy target of popular anger.

Guatemala has a special place in my heart because, in the middle of the 1980s, I spent several months there to write a book about civil wars that were then raging in the Central American isthmus.

Unlike most people who took an interest in Central America at the time, I did not favour the guerrilla insurrections, which I saw more as the product of the expansion of universities and the consequent spread of Marxism than of a spontaneous popular peasant discontent, this being the orthodox view of the situation at the time (albeit that there was discontent, and good reason for it).

Once the civil wars were over and the guerrilla insurrections were defeated, the western intelligentsia lost all interest in Central America because it was no longer a screen on to which it could project its fantasies of a happy socialist future just around the corner.

The Central American republics, with the exception of Costa Rica, resumed their normality, that is to say violent and corrupt polities set in the most magnificent landscapes, full of local colour.

It was in El Salvador that a peasant gave me a very succinct lesson in political philosophy. “I know,” he said, “that the guerrillas are better men than the government, but still I do not want them to win.” This suggested a level of intellectual sophistication that many a more highly-educated person would struggle to reach.

I had very strange experiences in Guatemala. One had only to look up the telephone numbers of ex-dictators and generals accused of almost genocidal violence and then call them to be granted an interview by them. “Yes, come tomorrow at ten in the morning,” they would say.

They lived in upper middle-class areas, in great comfort, but not in pharaonic grandeur. They made no effort to check who I was, demanded no identification, and let me into their houses without any measures of security. No prominent ex-politician in any large democracy would behave with such informality and lack of suspicion.

Among them were Generals Ríos Montt and Benedicto Lucas García, both of them accused of terrible abuses of human rights, indeed of mass murder. Both of them were later imprisoned, the latter in effect for life. They were extremely affable as well as polite, and Ríos Montt, who was a convinced evangelical Christian, gave me a religious tract to read.

Was it the smallness of the country that made them so accessible by comparison with democratic politicians in the West, or was it their supreme self-confidence that, notwithstanding their atrocious reputations, they had done nothing wrong, that their ends (defeat of the guerrillas) had justified their means (mass killing)? I do not know.

Benedicto’s brother, General Romeo Lucas García, was the subject of one of the best political jokes I ever heard. He was President of Guatemala for four years, both coming to and losing power by means of military coup.

Lucas García turned to his aide-de-camp and said, ‘Teniente, bring me my machete. I am going to cut this baby in two.’

‘But, mi general, you will kill the baby!’ said the teniente.

‘Aha,’ exclaimed Lucas Garcia, turning to the teniente, ‘so you’re the mother!’

The venerable University of San Carlos (the oldest in Central America) in those days resembled a revolutionary propaganda factory and guerrilla training camp. It was a horrible physical mess, of course (young idealists are always messy, their heads are too full of ideals to clean up after themselves).

The university enjoyed a peculiar statute of autonomy: no law-enforcement agent of the state was supposed to enter. This autonomy was tempered by extra-judicial execution of students once they left the campus. It didn’t seem a very satisfactory arrangement to me.

Now that I look back, I wonder whether some attenuated and no doubt less violent version of this arrangement could be our own future: though I am glad that, if it is, I shall not be around to experience it for long.