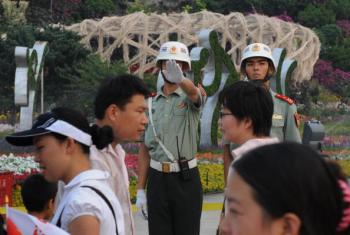 Documents suggest that there could be reprisals against civilians who speak to foreign press. (Mark Ralston/AFP/Getty Images)
China

Trouble for Chinese Who Speak to Foreign Media

Beijing police have been ordered to investigate Chinese civilians who have been interviewed by western media during the Olympics, official documents reveal.

The claims have been made by Reporters Without Borders (RSF) and are backed up by copies of the official directives published on the media watch-dog’s website.

RSF said that the instructions clearly told police to investigate Chinese people who talk to foreign media. Another directive, dated the day before the games began, gave clear directions to the police on how to quickly deal with any religious demonstrations.

"The recent arrests of Chinese who wanted to stage demonstrations or express themselves during the Olympic Games were examples of this desire on the part of the authorities to target their own citizens rather than the thousands of foreign journalists," said RSF via their website.

The Paris-based media group also said that the documents suggest that there could be reprisals against civilians who spoke to foreign press after journalists depart at the games’ conclusion.

One official document gives instructions for what to do if the interviewee “talks about subjects such as Tibet, Xinjiang, Taiwan and Falun Gong or criticises the Party or government but is not behaving outrageously”. The police are then required to "speak to the interviewee in accordance with Chinese legislation and to follow and monitor the journalist."

Reports have already been made of Chinese civilians being arrested for talking to foreign press about issues deemed sensitive by communist authorities.

RSF gave the example of two elderly Beijing women who were sentenced for one year to a re-education through labour camp on August 17 for seeking permission to demonstrate during the Games at one of the officially designated protest parks.

Another Beijing woman Zhang Wei was arrested on August 9 after complaining to Western media about how she lost her house due to Olympic developments.

RSF pointed out that the communist authorities’ campaign to intimidate local human rights activists prior to the Olympics meant many local calls for social, religious and political demands had been pre-empted. Over 40 Beijing activists,  RSF notes, have been put either under house arrest, forced to leave Beijing or are in hiding.

Another point in the directive ordered Beijing police to deal with any protests or activities by religious groups or individuals as quick as possible.

The police were ordered to "keep the crowd at a distance, devise all sorts of ploys to defuse the situation and immediately inform the Religious Affairs Department."