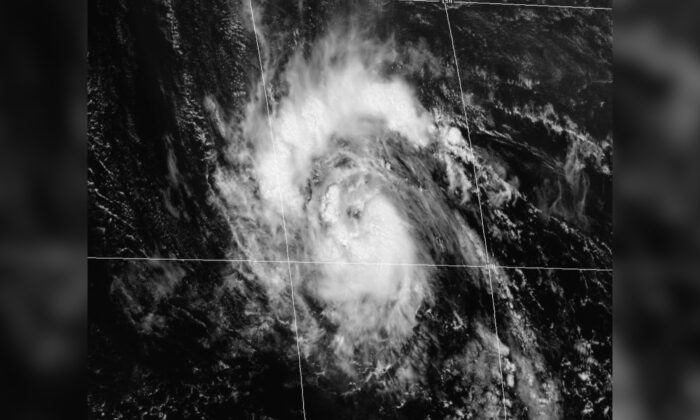 A satellite view of Tropical Storm Sam over the Atlantic Ocean on Sept. 23, 2021. (NOAA)
Americas

Tropical Storm Sam has formed in the eastern Atlantic Ocean and is anticipated to strengthen into Hurricane Sam by Friday, the U.S. National Hurricane Center (NHC) announced on Thursday.

Sam, the 18th named storm of the 2021 season, was upgraded to a tropical storm by the NHC early on Thursday. The weather agency said the system is located about 1,745 miles east-south-east of the Northern Leeward Islands.

The system is moving west at about 16 mph and is packing maximum sustained winds of 50 mph, it added.

“Additional strengthening is forecast over the next several days, and Sam is now forecast to become a hurricane tomorrow and be near major hurricane intensity by the end of the weekend,” according to an NHC advisory.

11 AM AST 23 Sep — #TD18 has been upgraded to Tropical Storm #Sam in the E ATL with max sustained winds of 50mph. Further intensification is expected. The track forecast has a WNW motion with gradual slowing, remaining E of the Antilles in 5 days.

The weather agency said the motion of Sam is expected to continue going westward over the next several days, and then the storm will gradually slow down.

There are no coastal watches or warnings in effect at the time as it is currently unclear if Sam will pose a threat to the United States.

According to model forecasts, it appears the system will curve north away from the U.S. East Coast next week, Weather.com reported, although it’s too early to completely rule out the storm as a potential threat.

It is likely Sam could generate high surf and rip currents along the U.S. East Coast more than a week from now even if it stays well offshore, the network reported.

Sam is currently the only active storm in the Atlantic as Rose and Peter weakened to tropical depressions and could further degenerate into a remnant low by Friday, the NHC said in its latest advisory.