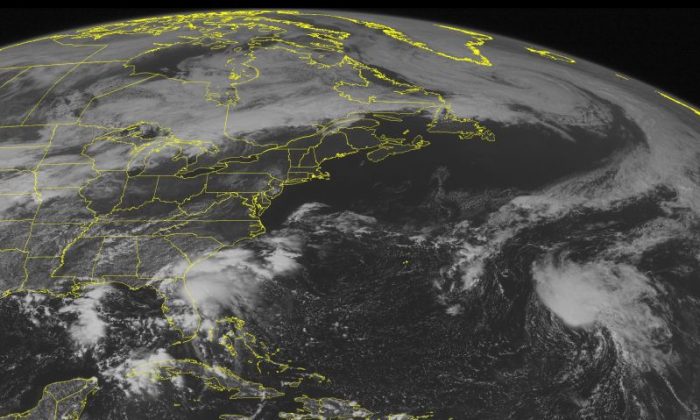 This NOAA satellite image taken Tuesday, Sept. 13, 2016, at 9:45 AM EDT shows a cold front over the Great Lakes and the Mid-Mississippi Valley. Along the front is a developing storm that is producing areas of rain. A strong area of high pressure over the Eastern United States, will direct the storm to the Northwest. This will keep the clear weather conditions over the east. Over Florida is a surface low pressure system that is developing tropical like characteristics. The low should move the Northwest and develop rain and gusty winds in its path. (Weather Underground via AP)
News

The slow-moving storm could cause flash flooding and was expected to produce 3 to 6 inches (76 to 152 mm) of rain in some areas through Friday, according to the U.S. The National Hurricane Center.

The Hurricane Center also said an isolated tornado was possible across coastal Georgia and southern South Carolina on Wednesday.

A tropical storm warning had been in effect Wednesday morning from Fernandina Beach to the Altamaha Sound in Georgia but was later canceled.

By 8 a.m. EDT Wednesday, Julia was centered about 10 miles (16 kilometers) west of Brunswick, Georgia, and moving north near 7 mph (11 kph). Its maximum sustained winds were near 40 mph (64 kph). The stormwas expected to weaken to a tropical depression later in the day.

Along the Georgia coast, one of the state’s largest school systems warned of possible school bus delays due to the storm. The Glynn County School System said in a statement Wednesday that despite the potential for delays on some bus routes, schools would remain open Wednesday and operate as usual.

Rossiter walked to school Wednesday morning in stiff, swirling winds and a steady drizzle, he said.

“If things worsen, we hunker down right here,” he said by phone. But classes were in session Wednesday and “so far, everything is a go,” he said.

Elsewhere, Tropical Storm Ian was moving north in the central Atlantic but still was no threat to land. In the Pacific, Hurricane Orlene continued to weaken.