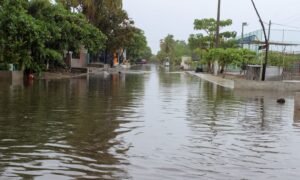 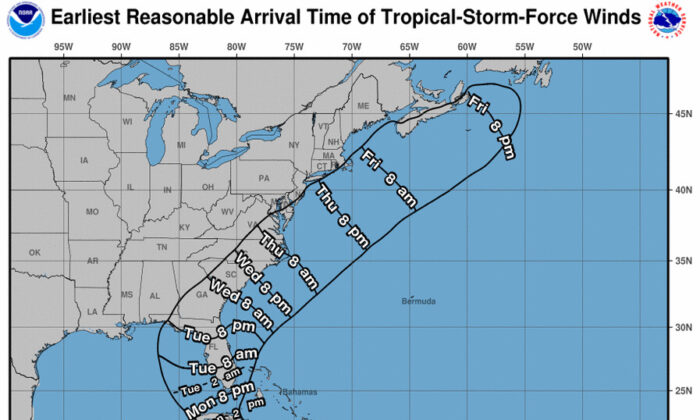 A map showing the earliest arrival time of Tropical-Storm-Force winds of Elsa, as of 11 a.m., ET on July 5, 2021. (National Hurricane Center)
US News

By Alex Harris and Gwen Filosa
From Miami Herald

MIAMI—Tropical Storm Elsa’s projected track jogged a bit west early Monday—easing the threat for South Florida, including most of the Lower Florida Keys, which now appear likely to see a windy, wet sideswipe rather than a direct hit from a slightly stronger but small system.

Elsa’s path will take it over most of central Cuba on Monday—where nearly 200,000 people have been evacuated—before it re-emerges in the Florida straits early Tuesday morning. On Monday morning, tropical storm watches on Florida’s west coast were upgraded to a warning and extended farther north. It’s potential Florida landfall site also shifted farther north overnight.

As of the 11 a.m. ET advisory, Elsa looks like it will make landfall in Florida in Horseshoe Beach, north of the Suwannee River, Wednesday morning. It was about 20 miles east-southeast of Cayo Largo, Cuba, and about 140 miles south-southeast of Havana.

The storm got slightly stronger overnight but continued to shrink, with 65 mph maximum sustained winds that now extended only 70 miles from the center. Its pace held steady at 14 mph.

The latest projections continued to inch Elsa’s track west and set up most of Florida’s west coast for a scrape from the small storm. In the 5 a.m. advisory, forecasters said Elsa’s strongest winds were mostly within 60 miles east of the center.

With that 11 a.m. update, the hurricane warning for portions of Cuba was downgraded to a tropical storm warning, a sign that the hurricane center no longer expects Elsa to strengthen back to a Category 1 storm while crossing Cuba.

“Some slight weakening is likely while Elsa crosses west-central Cuba today. Restrengthening over the Gulf of Mexico is likely to be limited,” forecasters wrote in the 11 a.m. advisory.

South Florida is firmly out of the cone of uncertainty, but forecasters said gusty winds and heavy rain are still possible through Wednesday as the storm grinds up the west coast. Miami will experience its gustiest winds (around 25 mph) midday Tuesday, according to the National Weather Service.

The Lower Keys could start to feel Elsa’s winds as early as Monday night, but more likely early Tuesday morning. The National Weather Service shows Key West could see maximum sustained winds in the low-40s with gusts as high as 57 mph around 7 a.m. Tuesday.

“This is mostly going to be squalls,” said meteorologist Jon Rizzo, of the National Weather Service in Key West, during Monday’s 9:30 a.m. countywide conference call of Keys leaders.

“You’re not going to have hours and hours of sustained winds,” he said.

Tropical-storm-force winds are likely to arrive in Key West in the form of frequent, fast-moving squalls between 10 p.m. to midnight and continue through about 12 p.m Tuesday.

Monroe County officials still recommend that those in RVs, mobile homes, travel trailers, and boats either leave the Keys by sunset Monday or find safer housing throughout the duration of the storm.

Residents should “have homes, boats and yards secure and be ready to shelter in place by sunset,” said Shannon Weiner, director of the emergency management office on Monday morning.

The Tampa Bay and Bradenton area could see 6 inches of rain this week as the storm nears, while the Keys are more likely to see 2 to 4 and Miami could see one or two.

Florida could also see 1 to 2 feet of storm surge from the Keys north to the Suwannee, with Tampa Bay expecting the most at 2 to 4 feet.

Winds are likely to pick up in Bradenton starting Tuesday morning with a peak of 29 mph sustained winds and gusts of up to 37 mph, according to the weather service.