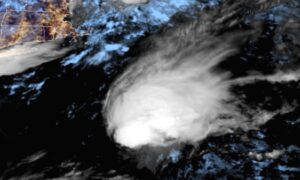 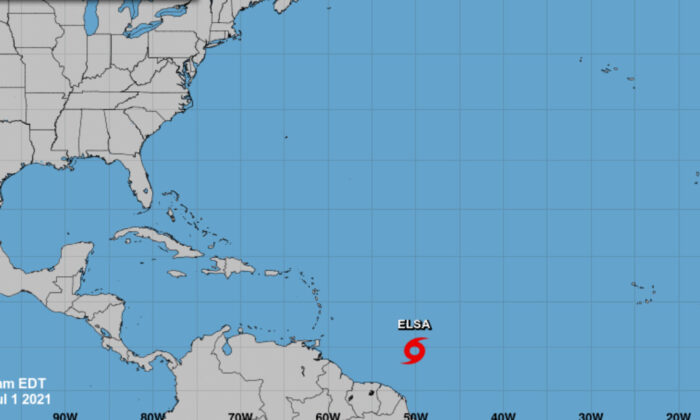 A screenshot of tropical storm Elsa which formed in the Atlantic, on July 1, 2021. (Courtesy of National Hurricane Center/Screenshot via The Epoch Times)
US News

MIAMI—Tropical Storm Elsa has formed over the tropical Atlantic on Thursday morning and is expected to cause heavy rains that may lead to isolated flash flooding and mudslides in the Caribbean.

Elsa had maximum sustained winds of 40 mph with higher gusts and was 865 miles east-southeast of the Windward Islands, according to the National Hurricane Center.

Tropical-storm-force winds extend outward up to 105 miles from the center. It was moving west at 25 mph. An even faster motion to the west-northwest is expected over the next 24 to 36 hours.

The storm is expected to pass near or over portions of the Windward Islands or the southern Leeward Islands on Friday, move into the eastern Caribbean Sea late Friday and Friday night, and move near the southern coast of Hispaniola on Saturday.

Elsa is forecast to produce rainfall totals of 3 to 6 inches with maximum totals of 8 inches on Friday across the Windward and southern Leeward Islands, including Barbados. This rain may produce isolated flash flooding and mudslides.

Tropical storm warnings have been issued for Barbados, Martinique, St. Lucia, St. Vincent and the Grenadines.

A tropical storm watch is in effect for Guadeloupe.