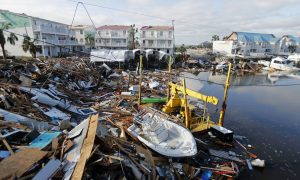 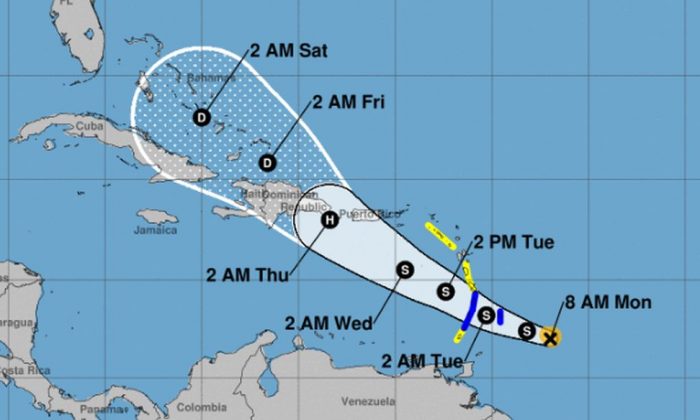 Tropical Storm Dorian has triggered warnings across the Caribbean islands on Aug. 26, and it could track near Puerto Rico as a hurricane later in the week. (NHC)
US News

Tropical Storm Dorian has triggered warnings across the Caribbean islands on Aug. 26, and it could track near Puerto Rico as a hurricane later in the week.

The U.S. National Hurricane Center (NHC) said on Aug. 26 that tropical storm warnings were issued for St. Lucia, Barbados, and St. Vincent and the Grenadines. Watches were issued for Dominica, Grenada, Martinique, and Saba and St. Eustatius.

“Interests in Puerto Rico, the Virgin Islands, and Hispaniola should monitor the progress of Dorian as watches could be required as early as later today,” the agency wrote.

5 PM EDT: #Dorian is strengthening as it continues to move westward toward the Lesser Antilles. Additional Tropical Storm Watches and new Tropical Storm Warnings have been issued for some of these islands. https://t.co/iy83hSifGz pic.twitter.com/ZCSeEnJw45

It added that the center of Dorian “is moving toward the west near 14 mph. A turn toward the west-northwest is expected later today, with this motion continuing through Tuesday night.”

Currently, the storm is about 200 miles east-southeast of Barbados as of Monday morning.

“On the forecast track, the center of Dorian is expected to be near the Windward Islands late today and tonight and move into the eastern Caribbean Sea on Tuesday,” according to the NHC.

“Strengthening is forecast during the next few days, and Dorian could be near hurricane strength on Tuesday and Wednesday while it moves over the eastern Caribbean Sea,” the agency said.

The Atlantic hurricane season officially started on June 1 and lasts until Nov. 1, and the National Oceanic and Atmospheric Administration (NOAA) said there could possibly be four to eight hurricanes.

The NOAA said it has a 70 percent confidence of its seasonal forecast.

A tropical depression could form off Florida due to weather conditions, AccuWeather reported on Sunday.

The area of disturbed weather, dubbed Invest 98L by the hurricane center, wandered over the Florida Peninsula on Saturday and brought localized downpours to eastern parts of the state.

“As 98L begins to move northeastward away from Florida, conditions should be conducive for further development and organization of this system over the next few days as it moves through a zone of warm water and fairly low wind shear,” AccuWeather Senior Meteorologist Dan Pydynowski said.