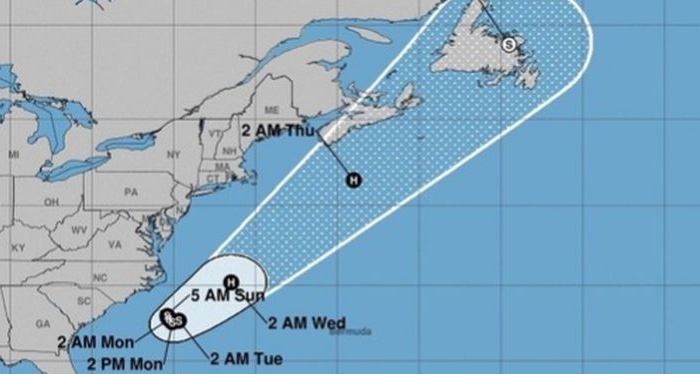 Tropical Storm Chris Forms Off East Coast of US

A new tropical storm has formed off the Carolinas, and according to forecasters, it could become a hurricane.

Tropical Storm Chris is located about 150 miles south of Cape Hatteras, North Carolina, and it has maximum winds of 40 mph. It’s not moving, according to the National Hurricane Center.

“There are no coastal watches or warnings in effect,” the NHC said, stipulating, however, that “interests along the coast of North Carolina should monitor the progress of this system.”

“Chris is forecast to meander off the coast of the Carolinas for the next several days. An acceleration toward the northeast is expected to begin on Tuesday,” the agency added.

The storm is forecast to turn away from the United States. AccuWeather predicted that the storm could strengthen into a hurricane.

At the same time, the storm is expected to churn up rough seas along the East Coast. On Saturday, one man died in rough surf off Kill Devil Hills, North Carolina, AccuWeather reported.

The storm could graze or directly hit Nova Scotia or Newfoundland with heavy rain and strong winds in the next week or so, according to forecasters.

Tropical Storm Beryl, which weakened from a hurricane, is expected to degenerate as it heads over the eastern Caribbean Sea. As of Sunday at 8 a.m., the storm was about 150 miles east-northeast from Barbados and 285 miles east of Martinque, the NHC said.