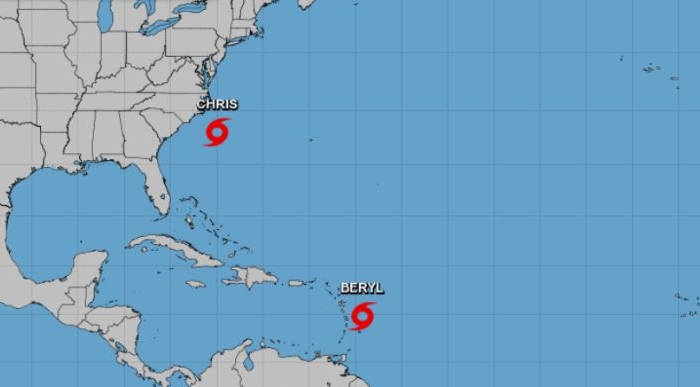 A man drowned off the coast of North Carolina amid warnings about rough surf as Tropical Storm Chris formed more than 150 miles off the state’s coast.

Tropical Storm Chris was named on Sunday by the National Hurricane Center, and as of 5 p.m., was 180 miles south of Cape Hatteras, North Carolina. While there are no warnings or watches, the National Hurricane Center warned about rough surf conditions, saying that “swells generated by Chris are expected to increase and affect portions of the coasts of North Carolina and the mid-Atlantic states into early next week.”

“These swells could cause life-threatening surf and rip current conditions. Please consult products from your local weather office,” the agency said.

WRAL-TV5  reported that the man went missing after going swimming at about 12:15 p.m. on Saturday. Lifeguards were able to pull the unresponsive man out of the ocean and performed CPR.

Paul Dennis Bindulski, 62, of Kill Devil Hills, was later identified as the victim by Fox8.

He was taken to a nearby hospital where he was pronounced dead, WRAL-TV5 reported.

Warnings to swimmers were placed around the Kill Devil Hills beaches, where Bindulski was swimming.

He died when Chris was still a tropical depression off the coast of the Carolinas.

The storm is forecast to strengthen and move over warm ocean waters over the next 72 hours and become a hurricane by early next week, according to weather forecasters. The storm is then predicted to move toward Nova Scotia and Newfoundland, Canada, and gradually weaken as it hits cooler water.

“If #Chris becomes a hurricane as forecast, it will be the second hurricane in July,” Brian McNoldy, a senior research associate at the University of Miami’s Rosenstiel School of Marine and Atmospheric Science, wrote on Twitter. “Last time there were two July hurricanes was 2008 [Bertha and Dolly].”

In the Atlantic, Tropical Storm Beryl, which was downgraded from a Category 1 hurricane, is slated to approach the Lesser Antilles islands. The storm is now located 60 miles northeast of the island of Martinique and 70 miles east-southeast of Dominica. It has maximum winds of 45 mph, and it’s moving west-northwest at 26 mph, according to the NHC.