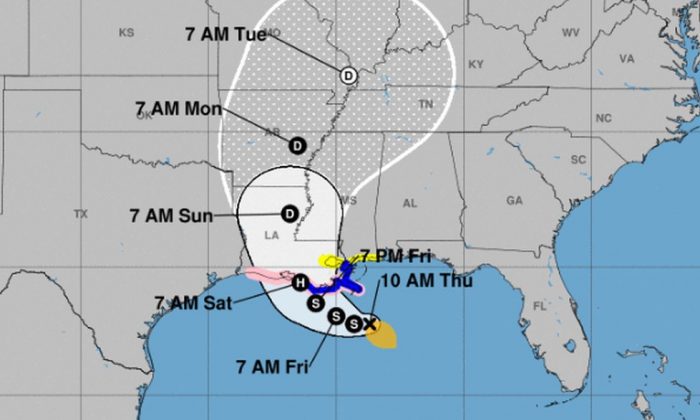 The forecast model showing where Barry is heading (NHC)
US News

Tropical Storm #Barry has formed. Barry faces obstacles, but is likely to intensify before landfall. Regardless of how strong the winds become, by far the greatest danger is flooding, both from storm surge and inland rainfall from a slow-moving storm. Get prepared. pic.twitter.com/z3aUGL8SXj

The storm, meanwhile, has 40 mph winds and is moving 5 mph to the west, which is considered slow.

A hurricane watch was put in effect for the mouth of the Mississippi River to Cameron.

Barry is born! Here’s the latest track from the NHC. @wdsu pic.twitter.com/mUrz74hxxE

Barry is forecast to strengthen into a hurricane before slamming the Mississippi River Valley over the weekend.

“There is a fairly high chance that Tropical Storm Barry will become a Category 1 hurricane on the Saffir-Simpson scale before making landfall,” said AccuWeather’s Dan Kottlowski.

He said the storm is forecast to hit Louisana on Friday night or Saturday.

Update: Here are the 10 AM CDT Key Messages on Tropical Storm #Barry, expected to bring dangerous storm surge, wind and rainfall impacts to portions of the Gulf Coast. See https://t.co/tW4KeFW0gB and https://t.co/SiZo8ohZMN for more information. pic.twitter.com/njn6ty8FLV

“Our greatest concern is for torrential rain that would result in life-threatening flooding,” Kottlowski said. “Heavy, flooding rainfall is expected over a large area especially over much of eastern Louisiana into parts of southern and central Mississippi and parts of southeastern Arkansas.”

“The slow movement of this system will result in a long-duration heavy rainfall threat along the central Gulf Coast and inland through the lower Mississippi Valley through the weekend and potentially into early next week,” the hurricane center said. “Flash flooding and river flooding will become increasingly likely, some of which may be significant, especially along and east of the track of the system.”

The Weather Prediction Center is predicting up to 15 inches of rain in some parts of Louisiana due to the storm.

20-30″ of rain in the Euro model forecasts from Barry across Louisiana.

Even if it’s only a tropical storm or a minor hurricane, the very large circulation will transport boatloads of Gulf moisture northward into Mississippi River. pic.twitter.com/G9qFi5WHIE

Some models have predicted between 20 to 30 inches of rain across Louisiana due to Barry.

According to The Associated Press, mandatory evacuations were ordered southeast of New Orleans on Thursday as the city and a surrounding stretch of the Gulf Coast braced for a possible hurricane over the weekend that could unload heavy rain and send water spilling over levees.