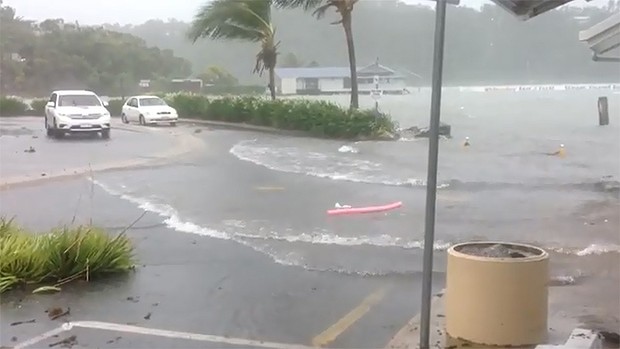 A storm surge on Thursday at Shute Harbour. (YouTube)
Australia

Tropical Cyclone Dylan is moving toward Queensland in Australia and is expected to make landfall between Lucinda and Proserpine in the early hours of Friday.

The storm was upgraded to a cyclone on Thursday.

“Large waves may produce minor flooding along the foreshore,” the weather service said, reported the Guardian.

Heavy rain may lead to flash flooding both at the coast and inland.

The storm was about 235 kilometers northeast of Townsville at 1 p.m., moving west south-west at 14 kilometers per hour towards the Queensland coast.

Cyclone Dylan is packing winds of 120 kilometers per hour.

‘‘In Bowen it’s very windy, some boats have actually washed up, broken their anchors,’’ she said from Proserpine.

Meanwhile, residents in Townsville’s low-lying “Red Zone” have been told to prepare for flooding from a 4.12 meter high tide.