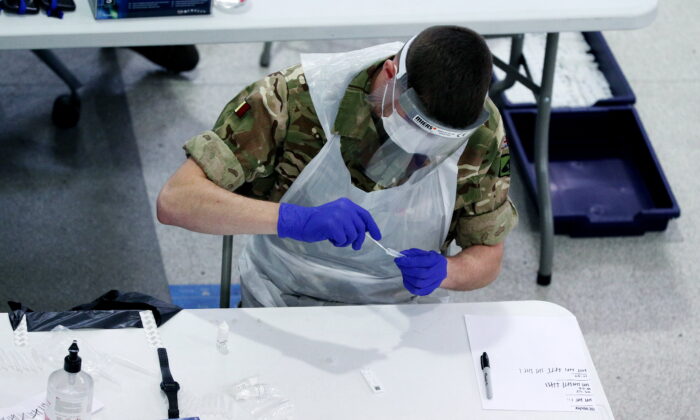 Troops are to begin deploying in London to support the NHS amid growing staff shortages due to COVID-19, the Ministry of Defence (MoD) has said.

Around 200 armed forces personnel are being made available to hospitals across the capital, which has been the epicentre of the Omicron outbreak with a huge upsurge in cases.

The announcement comes after Prime Minister Boris Johnson said this week that ministers hoped to “ride out” the latest wave without the need for further restrictions in England.

The MoD said the deployment included 40 military medics and 160 general duty personnel to help fill gaps caused by absences of NHS staff unable to work because they were ill or having to self-isolate.

They will be deployed in 40 teams of five—comprising one medic and four support personnel—and will be targeted at areas where the need is greatest.

It is expected they will be “on task” for the next three weeks.

In addition, 32 military co-responders are being provided to support the South Central Ambulance Service, working alongside paramedics until the end of March.

Defence Secretary Ben Wallace said: “The men and women of our armed forces are once again stepping up to support their dedicated colleagues in the NHS as they work hand-in-hand to protect the nation from COVID-19.

“They have shown their worth time and again throughout this pandemic, whether driving ambulances, administering vaccines, or supporting patients in hospital, and they should be proud of their contribution to this truly national effort.”

However, the Royal College of Nursing’s director for England, Patricia Marquis, said the deployment meant the government could no longer deny there was a “staffing crisis” in the NHS.

“The prime minister and others can no longer be dismissive of questions about the ability of NHS staff to deliver safe care,” she said.

“Once the military has been brought in, where does the government turn next in a bid to ‘ride out’ the wave rather than deal with it?”

Around 1,800 service personnel are already deployed across the UK to support the civil authorities in their response to the pandemic.

Infections remain high, with the latest official figures showing there were a further 179,756 lab-confirmed cases of the virus recorded in the UK as of 9 a.m. on Thursday.

In England, 62.8 percent of COVID-19 patients in acute NHS trusts on Dec. 4 were primarily treated for COVID-19, and the number was around 61.8 percent in London.

Meanwhile, there are signs that schools are also coming under pressure, with a third of school leaders reporting staff absence rates of more than 10 percent for COVID-related reasons, according to a survey by the National Association of Head Teachers (NAHT) union.

The snap poll found the overwhelming majority (95 percent) had pupils off due to COVID-19 at the start of term, while 29 percent said more than 10 percent of their students were absent.

Paul Whiteman, general secretary of the NAHT, has warned that schools were “teetering on the edge” with considerable shortages, adding that absences due to illness may “very likely rise” during the term.