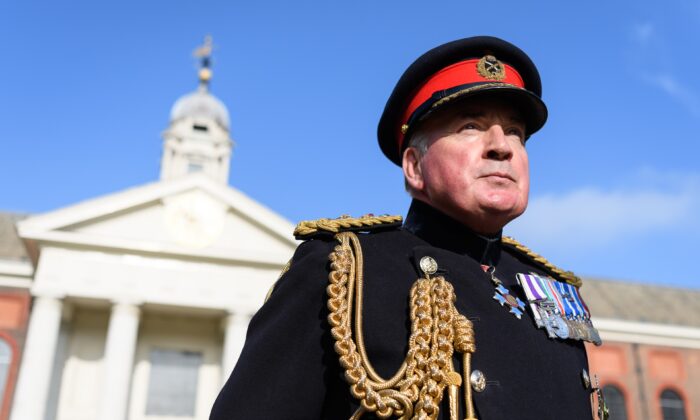 Gen. Lord Dannatt, the former chief of the general staff, poses for a photograph after taking part in a photograph to commemorate 100 years since the end of the World War I, at Royal Hospital Chelsea in London, on Oct. 16, 2018. (Leon Neal/Getty Images)
UK

The UK government’s decision to go ahead with planned troop cuts despite the war in Ukraine is “madness” and will put the British Army at “breaking point,” a former army chief has warned.

At the NATO summit in Madrid last week, Prime Minister Boris Johnson said the government will increasing its defence spending to 2.5 percent of GDP by the end of the decade.

But the government said it is still going ahead with the decision to cut the army by 10,000 soldiers over the next few years, which was set out in last year’s Integrated Review.

Gen. Lord Dannatt, former head of the British Army, said on July 3: “It’s a mere fact of life we’ll break the remainder of our army if our army is not large enough … to do what the government of the day wants us to do.”

“You can’t make people work endlessly with too small numbers. So numbers in the terms of our land forces really, really matter.” he told Sky News.

Dannatt urged the government to reverse the cuts, as the army will have to play its part in “deterring Russian aggression,” he said.

The retired general added, “When it comes to old-fashioned fighting, numbers do matter and to have an army of only just over 70,000, 30 percent down from where we were 10 years ago is going to leave us woefully short if we find that we’ve got to maintain large number of troops at high readiness forward-deployed in Eastern Europe.”

Johnson’s promise to increase the defence budget was made after he came under pressure from senior Cabinet ministers and military chiefs to boost defence spending.

Defence Secretary Ben Wallace said on June 28 that the UK needs to boost its investment in defence before it is too late.

In a speech at the Royal United Services Institute (RUSI), he said more action is needed to reverse the cuts made by successive governments—both Conservative and Labour—following the Cold War to cash in on the so-called “peace dividend.”

Also speaking at the event, the new head of the British Army, Gen. Sir Patrick Sanders, said any further cuts to the size of the army—which is set to shrink from a target figure of 82,000 troops to 72,500—would be “perverse.”

But Downing Street defended the government’s record on defence funding, insisting the benefits of new technology and kit outweighed cuts in the number of soldiers.

The prime minister’s official spokesman said it would be “wrong” to “focus solely on numbers when we can see the impact that the latest technologies, equipment, training, intelligence are having.”