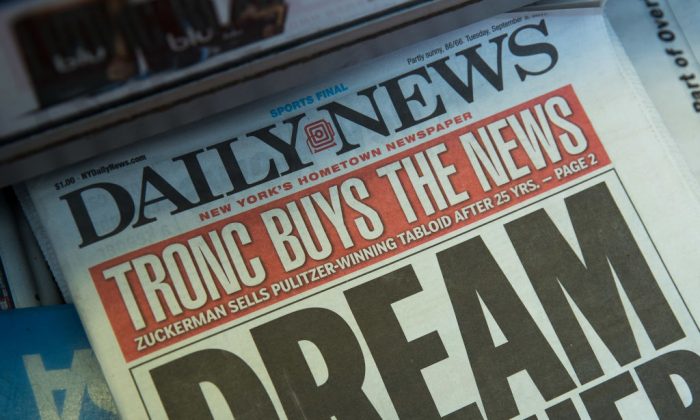 A copy of Tuesday's New York Daily News sits on the shelf of a newsstand, September 5, 2017 in New York City. (Drew Angerer/Getty Images)
US News

The owner of the New York Daily News announced on July 23 that it would be laying off 50 percent of the tabloid’s newsroom staff.

In a memo to employees, Tronc, the tabloid’s owner, wrote that the transformation of the newspaper since the beginning of this year into “a truly-digitally focused enterprise” has “not gone far enough.”

“We are reducing today the size of the editorial team by approximately 50 percent and re-focusing much of our talent on breaking news – especially in the areas of crime, civil justice, and public responsibility,” the owner wrote.

“I know this is difficult news and want to assure you we are working hard to treat each employee with respect and to make the transition as smooth as possible.”

“Both of them have handled their responsibilities with professionalism and grace under difficult circumstances, and we wish them the best,” Tronc wrote.

Rich removed mentions of the Daily News from his Twitter profile and changed his bio to, “just a guy sitting home watching journalism being choked into extinction.”

“If you hate democracy and think local governments should operate unchecked and in the dark, then today is a good day for you,” Rich wrote.

Billionaire Mort Zuckerman sold the newspaper to Tronc last year for one dollar and the assumption of around $100 million debt and liabilities.

Upon taking over, Tronc began reorganizing the Daily News. Tronc itself was undergoing a reorganization as well. In February, the company sold the Los Angeles Times for $500 million to local billionaire health care mogul and former surgeon Patrick Soon-Shiong.

According to Pew Research, nearly 36 percent of newspapers across the United States laid off employees. Larger newspapers with circulations of over 250,000 were more likely to lay off staff, with 56 percent reporting layoffs between January 2017 and April 2018.