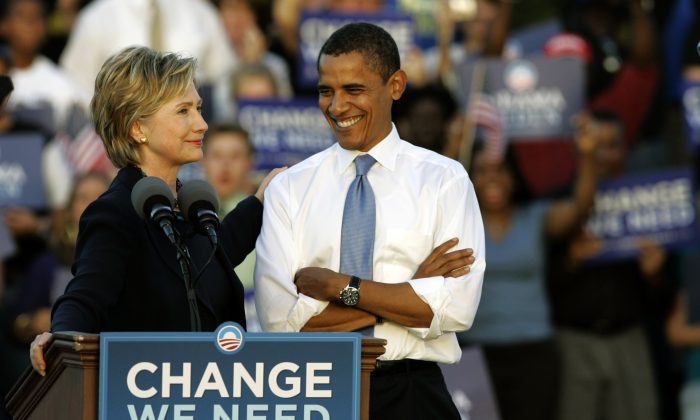 In this Oct. 20, 2008 file photo, then-Sen. Hillary Clinton, D-N.Y. delivers a speech supporting Democratic presidential candidate Sen. Barack Obama, D-Ill., at a rally in Orlando, Fla. A still undeclared candidate, Clinton sits atop the prospective field of Democratic presidential candidates for 2016. But as she has said before, if Clinton runs again, she'll work as hard as any underdog. Clinton's 2008 presidential bid stumbled against President Barack Obama, undermined by anti-war activists who opposed her vote to authorize the Iraq war, infighting among her staff and a large entourage in the early states where retail politics matter. (AP Photo/John Raoux, File)
US

For President’s Day, someone started the Twitter hashtag #ILoveObama. Within seconds, a troll army had formed.

Long story short, some anonymous folks do not love President Barack Hussein Obama. They seem to hate him. The tweet I thought was most likely to interest the FBI said, “#ILove Obama because he has motivated me and millions of others to enhance their marksmanship by exercising their Second Amendment birthright.”

Was that an assassination threat? Not in great taste on President’s Day, since we have lost both great and obscure presidents that way.

Tweeting, unless you are a journalist and mindful of your mother ship’s credibility, is a lot like scrawling something on a bathroom wall. The most ugly sentiments have free play there. During the Ferguson riots, a young and kind-hearted colleague said reading the tweets about it was destroying his view of humanity.

What Obama Missed About Big Pharma Profits and Innovation

Why Did Obama Compare the Crusades to ISIS?

Just like reading the #ILoveObama tweets is destroying my view of my fellow citizens. Some conscientious Democrats refuted the haters with infographics and charts about the rising employment and shrinking national debt during Obama’s presidency. They compared and contrasted the number of vacation days Obama has taken to the number George W. Bush took (more). So endearing! Obama drew so many A-students out there in social media land.

But the homework-doing Poindexters met a mass of bullies toting sacks full of the ‘food stamp president,’ the appeaser of terrorists, and the Kenyan secret Muslim with the mythical missing birth certificate. Besides the tabloid accusations, our trolls brought racial slurs, profanity, insults to the first lady and physical threats. Stay classy, USA!

There are policies I have a problem with. I have a problem with some of every president’s policies, every time. I won’t bore you by listing them—but the whistleblower crackdowns, the overuse of drones, claiming transparency while becoming more opaque, spring to mind right away. It’s a long, long road from there to hate.

Some anonymous folks do not love President Barack Hussein Obama.

Oddly, despite the hate Tweets and what I have read are an unprecedented number of threats, Obama keeps topping the Gallup poll of most admired man. Presidents usually do, according to Gallup.

I covered the Democratic Convention in Denver in 2008, back when the Shepherd Fairey “Hope” poster was everywhere. The anti-Obama trolls were already massing, but inside the Mile High stadium, they seemed to be miles away.

To my right, sat an old black couple. They were slim and venerable. They were dressed in red, white, and blue. They were waving little American flags, and wearing Uncle-Sam style top hats. Heartfelt joy showed on their faces as Obama accepted the presidential nomination.

I will never forget them.