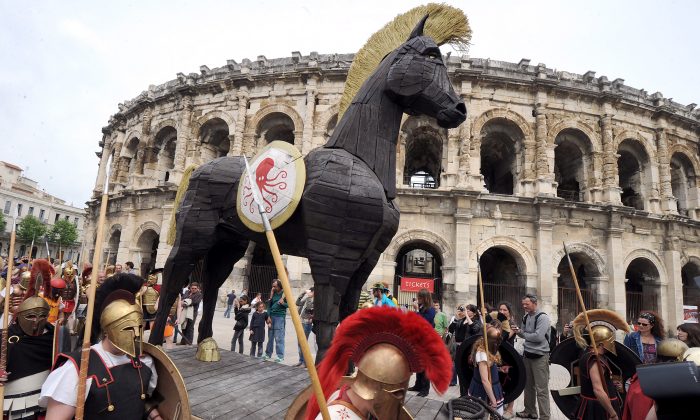 TO GO WITH AFP STORY BY REMY ZAKA - People parade with a Trojan horse during an historical reenactment in front of the amphitheatre as part of the third edition of the Roman Games on April 28, 2012 in Nimes, southern France. The event, that focused this year on the Trojan war, runs until April 29. AFP PHOTO / PASCAL GUYOT (Photo credit should read PASCAL GUYOT/AFP/GettyImages)
Opinion

Trojan Horse in the Heart of America

The legend of the Trojan horse is ever-new, illuminating dire lessons to be learned due to contemporary issues in America.

Our country is in desperate need of an ethical renaissance. We must be vigilant due to the realities of deception from within.

According to myth, the Trojan horse was a huge, hollow wooden horse constructed by the Greeks.  It is designed to deceive by penetrating the walls of Troy during the Trojan War.

The Greeks deceived the Trojans to believe the horse was an offering to Athena, the goddess of war.

The deception violated not only physical security principles by gaining unauthorized access, but involved supernatural duplicity.

The Trojans were deceived to believe that their goddess would make Troy impregnable against their enemies.

Although the Trojans were warned, they allowed the Trojan horse to enter into the very heart of their society.

Afterwards, under cloak of night, Greek warriors emerged from the horse, and opened the gates for their army.

The moral of the story is to be aware of deception, especially through the guise of pleasantries, honor, and generosity.

Unfortunately, this lesson has not been learned throughout the ages, as individuals are continually manipulated, tricked, or scammed.  When subterfuge takes place from within, it is particularly destructive.

The expression is translated as “Do not trust the horse, Trojans! Whatever it is, I fear the Greeks, even bringing gifts.”

Society must be built on the foundation of truth, which always contradicts false witness, deception, and lying.

Truth is a moral requirement for society, and offenses against honesty, by word or action, are violations against character, ethics, and moral decency.

By our nature, we must exist in harmony with truth, as it is vital to the dignity of our humanity.

Truth is expressed through candor, sincerity, and honesty.  It is a virtue required in the normal encounters of daily life, and it is mandatory at the highest levels of the nation.

Truth is always opposed to the destructiveness of deception, duplicity, and hypocrisy.  Although deviances may have their moment, truth must be forever upheld, for in due time, it will have its victory.

Truth is also a virtue that respects the virtue of justice.  Whenever there are offenses against truth, as with rash judgements, deception, slander, immoral business practices, or calumny, there is an assault against justice.

Lying is commonly understood as the most direct offense against truth.  The gravity of the lie is based on the manner in which truth is distorted, as well as the unjust suffering to its victims.

Lying is never acceptable, but tragically alive and well throughout America.  If one is honest about contemporary realities of American life, we are experiencing a crisis of truth throughout every segment of society.

Dishonesty is rampant in our courts, with deceptive affidavits, perjury, and manipulating the truth with the intent to deceive.

Lying is also massive and pervasive through corporate greed, in families through infidelities, and at the highest levels of government through cover-ups, corruption, and hypocrisy.

America must realign its moral compass, and enhance our vigilance to safeguard democracy.  We must have our eyes wide open to the numerous seductive deceptions taking place throughout society.

We must be ever mindful that deceptiveness, under the guise of progressiveness, is a violation of truth.

The violation of truth always opposes the character, dignity, and destiny of America.

Dangerous false pronouncements that dishonor truth are toxic to the heart of the nation.

Truth must always be served.  We must always take the moral high road and never accept compromises that are intoxicated by mediocrity.

America must dedicate itself to an ethical renaissance built on the pillars of truth, justice, and patriotism.

Our nation needs moral courage, ethical leadership, and unwavering vigilance for a reawakening.  These principles must take place in the hearts of all; individuals, families, students, educators, law enforcement, community leaders, corporations, and government officials.

America will undergo a transformation when character, built on the foundation of truth, is reawakened, renewed, and rejuvenated in the heart of the nation.

“We the People”, have a restlessness in our hearts that can only be satisfied when truth is served.   This truth is only authentic when it is opposed to self-aggrandizing schemes, shallow slogans, or manipulative huckstering.

A Trojan horse has penetrated the heart of America, cloaked by a veil of deception, dishonesty, and hypocrisy.

It is time for all privileged to call America home, to change the course.  This will only be possible through lives of character, honesty, and moral decency.