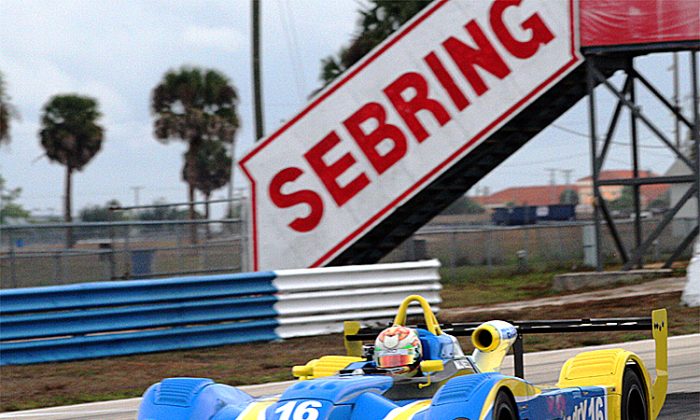 Nunez promotes the "Don't Text and Drive" campaign on and off the track. (James Fish/The Epoch Times)
Motorsports

SEBRING, Fla.—16-year-old Tristan Nunez was fastest in the field of IMSA Prototypes Lites drivers at the Cooper Tire Winterfest, Feb. 6–7 at Sebring International Raceway, despite having driven a Lites car barely half-a-dozen times.

Nunez proved faster than a dozen-and-a-half other drivers, most vastly more experienced, and he did it in a car he drove for the first time last January, then in March, and again in October. He came to Sebring, not having been in the car in four months, and by the end of the two-day event, topped the field. The guy’s got talent.

Performance Tech Racing saw that talent, which is why they signed him to compete in the full 2012 IMSA Lites season. What does the speedy teenager expect, given a full season to learn the car?

“As far as my odds for winning the championship, I think we have a really good shot at a win,” Nunez said. “After finishing second in three of the four races last year and topping the charts in the Winterfest, I believe that the season is going to be ours this year.”

The young driver is not overconfident. In only his fourth year as a driver he has scored a win in kart racing, was named Skip Barber 2010 Rookie of the Year, won the 2011 Skip Barber Summer Series, and finished second in three Lites races. He was running second in the fourth but a flat tire sidelined him.

Nunez started the two-day test session slowly, breaking in his new car, and working with his engineers to help them find the perfect set-up. By the last session, the car was perfect—or at least better than everyone else’s.

“When breaking in a new car, we do a shakedown to try different things with the setup,” Nunez explained. “Rather than worrying about lap times, we focus on looking for problems and working them out so that they are taken care of before the race weekend. During the last session we just let the car loose to see what the car had to offer.”

Speed isn’t all the young Floridian brings to the team. “My strongest points are how well I adapt to cars and my feedback about the car to the team,” Nunez said—points made clear by the progress the crew made with the car during the two-day event. “My biggest weakness is my age, but I am learning something new every day I’m at the track.”

Hard Work On and Off the Track

Nunez attends a high school for athletes, which gives him the flexibility to travel around the country to race. Along with school, the teenaged racer has plenty to keep him busy.

“During the off-season I was doing a lot of training, getting my strength up for a full season in the Lites car. My training included an eight-week weight and endurance program with a physical trainer. In addition, I was go-kart racing to keep my endurance up.

“When I wasn’t training, I was building up my ‘Don’t Text and Drive’ campaign by doing things like creating the Facebook fan page and attending safety fair events.” Nunez, who just got his driver’s license a few months ago, has joined AT&T’s nationwide campaign to tell teens about the dangers of distracted driving.

When he gets back behind the wheel of his Performance Tech Lites car for the first races of the season on March 15 he will be focusing just on racing. He won’t be thinking about the off-season, the training, his safety campaign. He won’t even be worrying about the other, more experienced drivers he faces.

“The roster for the race is still undecided so I’m not quite sure about what the competition is going to be like for the race. Regardless, I’m confident that I will perform well.”