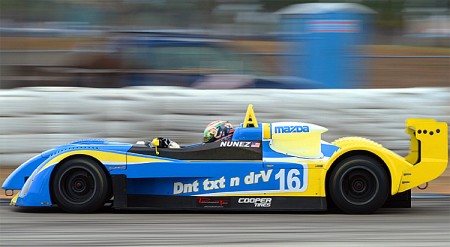 Nunez promotes the "Don't Text and Drive" campaign on and off the track. (James Fish/The Epoch Times)
Motorsports

Sixteen-year-old racing phenomenon Tristan Nunez has a penchant for using his position to help others.

This was first shown publicly when he eschewed the normal course of plastering sponsor names on the sidepods of his IMSA Lites race car in favor of the message “Dnt txt n drV,” one of the ways he publicizes AT&T’s “Txting and Drivng … It Can Wait” campaign.

It was made even more clear when the Florida teen spent his brief summer vacation (summer is racing season) in Fiji on a doing public service projects like building septic tanks, maintaining public buildings, and teaching in local schools.

And when Nunez races to win the IMSA Lites championship in his first years in the series later this week, he will once again be using his most visible position for a good cause: supporting National Breast Cancer Awareness.

“I got the idea to also support breast cancer awareness at Petit this past Sunday night while I was watching football and saw all the football players wearing pink,” Nunez in a press statement. “I thought it would be great to bring pink to the track.”

Like the NFL players with their pink accessories, Nunez will be sporting pink accents and messaging on his No. 16 Performance Tech Élan DP02 when he drives the last two events of the season at Road Atlanta on Oct. 18 and 19.

“I was afraid that my team owner [Brent Oneill] was going to think I was crazy when I called him Monday and said that I wanted to trim out my car in pink! After I pitched him the idea, I had his full support and soon after that, I found out that my teammates wanted to join in as well! It’s a good feeling to be able to bring awareness to great causes like Breast Cancer and Dnt txt n drV while doing something I love; racing!”

Nunez will be driving to raise awareness but also to win the 2012 IMSA Lites championship. After his exceedingly successful rookie season so far, the young driver could wrap up the title in the first race.

Nunez has scored 10 wins, 11 poles, and set seven track records in twelve races; he leads the competition by 39 points. He is already the youngest race winner in the series’ history; likely he will be crowned its youngest ever champion before the week is out.

Nunez has a special affinity for Road Atlanta; it’s not his home track (that would be Sebring, site of his first two Lites victories) but it is his favorite.

“Road Atlanta is my favorite track and it will be even more special if I can claim the championship there,” Nunez explained. “Brent Oneill and the Performance Tech team have jumped over many hurdles this season to give me a fast car to race and they deserve this Championship title along with all my partners, including Mazda and Cooper Tires! It will also be great to have my sponsor, Uncle Jim there as well as my grandparents, family and friends cheering me on. It’s really going to be an awesome weekend.”

Racing won’t end for Nunez when the IMSA Lites season ends; the talented teen will be heading overseas for even more valuable experience.

Nunez was one of three winners of the 2012 Team USA Scholarship for young racers, which program will be sending his to England to compete in front of representatives of European teams. Nunez will be driving under the Cliff Dempsey Racing banner in the Formula Ford Festival at Brands Hatch on Oct. 27-28 and the following weekend’s Walter Hayes Trophy at Silverstone on Nov. 3-4.

“I was fortunate enough to get some seat time this past weekend in the Formula Ford and I am even more excited for the challenge of racing in England and representing the USA following Road Atlanta,” said Nunez, who started in single-seaters, first in karts and then in Skip barber formula cars.

Before he can head across the pond, Nunez will need to take care of business here at home, and he will have to do so in front of a crowed of critical observers: his grandparents, several family friends, and his Uncle Jim, the gentleman who footed the bill to start Nunez’s racing career, will be at Road Atlanta for the championship races.

“It’s going to be really special to have my Uncle Jim at Petit,” said Nunez. “This championship race will be even more awesome having him there to share in the celebration in person and see what his four-year investment has led to!”