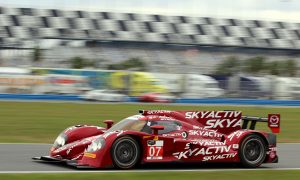 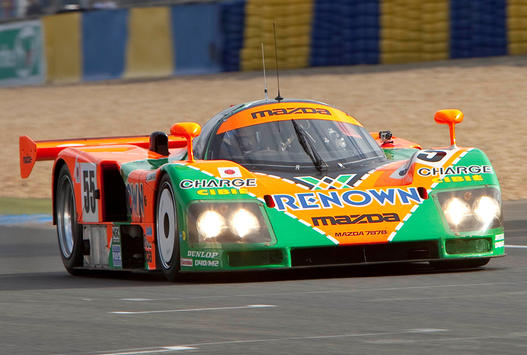 Tristan Nunez qualified second in the #55 Mazda Prototype, painted as a tribute to Mazda’s Le Mans-winning 1991 787B. (IMSA.com)
Motorsports

Nunez, who teamed up with co-driver Jonathan Bomarito to bring Mazda Motorsports its first podium finish in the series at the Chevrolet Sports Car Classic on June 4, was fast early in the qualifying session, but then had to pit to let the team fix a minor electrical glitch. After a short stop Nunez re-entered the track and laid down a series of increasingly fast laps, advancing from fourth to third and finally to second with a lap of 1:35.374 at 128.3 mph.

The two Mazdas are sporting throwback livery for Sunday’s six-hour race around Watkin’s Glen. The #55 is painted green, orange, and silver in honor of the marque’s 1991 win at Le Mans with the 787B rotary prototype. The #70 bears an identical pattern but in red, silver, and grey, expressing Mazda Motorsports’ current and future palette.

2016 has been a breakthrough season for Mazda Motorsports, with the team equaling or beating past results at every event. After finishing third and fourth at Detroit’s Belle Isle road course on June 4, the team is poised to capture its first prototype victory—and the historic Watkins Glen circuit would certainly be a fitting location.

Tristan Nunez has been a Mazda factory driver for four years—a phenomenal achievement for 20-year-old, but the young Floridian has the talent to fill the title. He scored his first wins for Mazda in the Rolex Sportscar Series at age 17 and has been driving the Lola-based, Mazda-powered prototype for three years. he was understandably excited at the prospect of racing with and quite possibly winning in the historic livery.

“”I may not have been born when they won Le Mans, but being an age where technology is key, there are a lot of videos on the internet of that car,” Nunez told IMSA.com. ‘” I’ve been watching the 787B for years—even before I got picked up by Mazda. It’s one of those cars that really captures your eye—and the sound that rotary motor made! It’s going to be an honor to run that paint scheme.”

“The new surface is unbelievable. I’ve never driven a smoother track in my life. It sounds weird, but it’s so smooth you have to relearn the track. You don’t feel any bumps, which was really surprising. It has so much grip the car just hooks up around the corners so well. The Mazda Prototype really likes the track because we can run it really low, which is the secret to the aerodynamics of this car. I’m interested to see how we compare to the competition, but I think we have a good finish in the crosshairs for sure.”

Nunez and Bomarito will team up with IndyCar and Indy Lights driver Spencer Pigot for the six-hour race, while Mazda’s regular endurance-race drive Ben Devlin will join Tom Long and Joel Miller.

The IMSA WeatherTech Sahlen’s Six Hours of the Glen at Watkins Glen International will be broadcast live in its entirety on Fox Sports One starting at 10 a.m. EDT on Sunday, July 3. Timing and scoring can be followed online at IMSA.com.