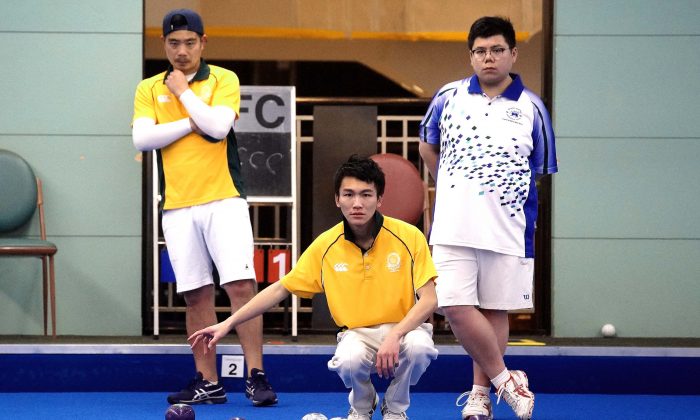 Craigengower Cricket Club skipper Lee Ka Ho (middle) directing the play of his teammate during the crucial league match against Hong Kong Football Club. He defeated the team skipped by Anthony Yip (right) 10:19 and set the tune for a 8-0 victory. CCC moved top after the win. (Mike Worth)
HK Sports

Triples League Title Fight Down to the Wire

In the penultimate match of the Triples League season before the Chinese New Year break, CCC travelled to the new indoor greens at neighbouring Hong Kong Football Club who were lying third with an outside chance of clinching the title at that time.

It was a tight match between the two sides with Stanley Lai (CCC) narrowly defeating National Singles champion Tony Cheung 15:17, and Knock-out Singles champion Lui Chin Hong (CCC) also needed to come from behind to beat Indoor Singles champion CT Wong 12:16. There was not much trouble for Lee Ka Ho who won against Anthony Yip comfortably at 10:19.

The victory moved CCC to the top of the table for the first time this season as Kowloon Cricket Club (KCC), who topped the table with a four points cushion before the match, suffered their second loss of the season at the hands of the Youth Development Team.  The 6-2 scoreline meant that they were now two points behind CCC.

Filipino Club moved to third after taking full points from HKFC-B but they are still seven points below KCC.

This weekend will see the top two teams both playing at home.  Leader CCC-B will be up against the mid-tabled Police who do not have anything to play for.  KCC aims at taking full points from lowly HKFC-B who are desperate to fight against relegation.

At the other end of the table there will also be a crucial match between bottom club CCC-A and third from bottom Kowloon Bowling Green Club (KBGC).  KBGC currently has eight points more than CCC-A but their position will be reversed if CCC-A can beat them 8-0 at home.  The outlook of HKFC-B, who are sandwiched between the two, does not seem rosy as a strong KCC will require full points to maintain their title hope.

In Division 2, KCC-B confirmed that they would finish as champion after defeating Shatin Sports Association 7-1 at home.  Their points tally of 47 is uncatchable by second-placed Island Lawn Bowls Club, who have just accumulated 35 points.

Results in some of the lower divisions were also confirmed before the last match.  Tuen Mun Sports Association (C team) are crowned champions and Planning Department Lawn Bowls Club (A Team) are relegated in Division 4.

The final match of the Triples League season will start at 3pm this weekend.  The women’s league will give way to the men so their last game will be played next week.