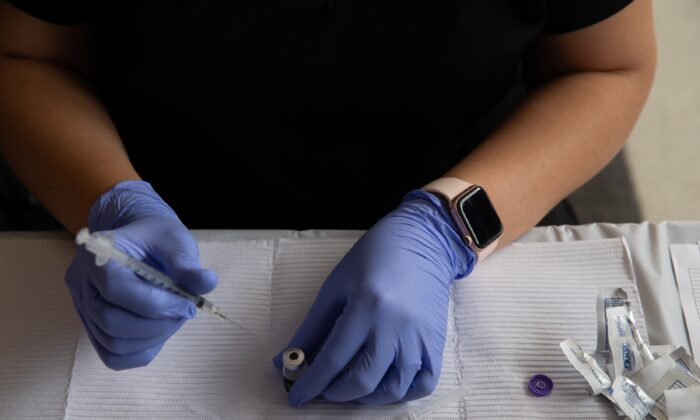 People who received two or three doses of a messenger RNA COVID-19 vaccine were more likely to contract COVID-19 with symptoms, according to a new study.

Researchers found that vaccinated people had higher odds of experiencing symptomatic COVID-19 than the unvaccinated, even if they had received a booster shot on top of a primary series.

Researchers with the University of Utah and other institutions examined health care personnel, first responders, and other frontline workers from Dec. 14, 2020, to April 19, 2022. The participants submitted self-collected nasal swabs on a weekly basis, as well as when participants experienced signs of illness.

Of those infected with COVID-19 since Omicron became the dominant virus strain in late 2021, 109 were unvaccinated and 634 were vaccinated. And of those, 85 unvaccinated people were symptomatic, compared with 216 people who received a primary series of a messenger RNA (mRNA) immunization—two doses of either the Pfizer or Moderna vaccines—and 327 people who received a booster in addition to the initial doses.

The results differed from when the Delta variant was dominant, when unvaccinated people were more likely to have symptomatic COVID-19.

The study was published in the Journal of the American Medical Association.

The researchers utilized the HEROES-RECOVER network, which includes frontline workers such as garbage truck drivers and daycare workers. The network is funded by the Centers for Disease Control and Prevention.

Researchers said the limitations of the study may have led to the finding that unvaccinated people were less likely to experience symptomatic COVID-19.

“Limitations in sample size and the ability to adjust models for potential confounders made it particularly difficult to interpret unexpected findings, such as a higher percentage of individuals with symptomatic disease among those vaccinated with the third vaccine dose 14 to 149 days before Omicron infection compared with those who were unvaccinated,” they wrote.

Sarang Yoon, assistant professor in the Department of Family and Preventive Medicine at University of Utah Health and one of the authors of the study, focused on how the vaccinated were better off in some categories.

“It’s encouraging that the mRNA vaccines hold up rather well against these variants,” Yoon said in a statement. “We know that breakthrough cases are more likely with Delta and Omicron than the initial strain, but the vaccines still do a good job of limiting the severity of the infection.”