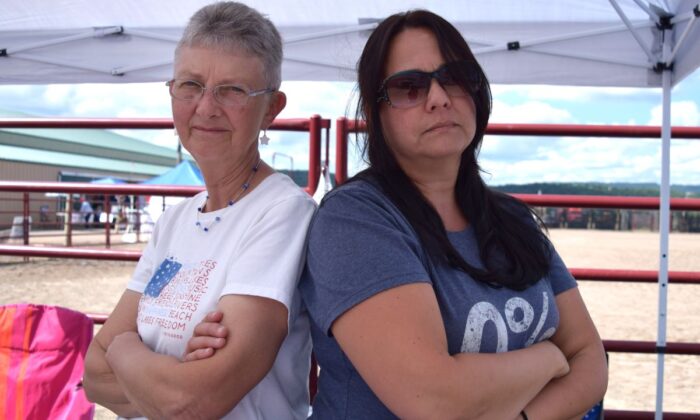 After being prosecuted for refusing to wear masks at a local school board meeting, Elaine Barnhart (L) and Katherine Detwiler collected donations to help with their legal fees at a patriotic political gathering in Columbia County, Pa., on Aug. 27, 2022. (Beth Brelje/The Epoch Times)
Policies & Impacts

BLOOMSBURG, Pa.—A year after attending a Pennsylvania school board meeting about requiring students to wear COVID-19 masks, three people are still in court trying to get the charges dropped for alleged criminal defiant trespass. The charge is punishable by up to 5 years in prison and $10,000 in fines.

Their cases could have statewide legal implications, potentially giving school boards more power over the public.

Katherine Detwiler, Elaine Barnhart, and Gary Krum of Columbia County attended the Southern Columbia Area School District board meeting on Sept. 13, 2021. The meeting was held in the school library, and the board was discussing a mask mandate for students.

“I believe the mask issue was not just the mask issue. It was part of the growing tyranny that is developing in the nation and in the state of Pennsylvania,” Krum, 71, told The Epoch Times. “And I believe—which the Pennsylvania Supreme Court ultimately agreed with—that the mandate the governor implemented was not within his power to do so.”

Krum was concerned that students didn’t have a voice to object, and he felt led to speak on their behalf.

While waiting for the meeting to start, school police officer David Townsend announced that the school board had implemented a new mask policy and that anyone wishing to attend the meeting would have to wear a mask.

Attendees questioned whether the policy was a law, and if it was legal to prevent citizens from attending, court papers say.

Superintendent James Becker stepped into the conversation, repeating Townsend’s message: to stay in the meeting, a mask was required. While he was talking, school board members indicated they wanted to go into executive session—a private meeting. Becker instructed all citizens to go wait in the cafeteria, court papers say.

In the cafeteria, the debate over the legality of requiring the public to wear a mask continued.

“A school security officer came in with us and told us he was a retired state police officer, and he understood us. We had a nice discussion with him,” Barnhart, 71, told The Epoch Times. But someone called the Locust Township Police and soon a patrolman arrived. “He said he was called by [the school] to come and ask those without a mask to leave.”

Detwiler, 46, was upset when police arrived.

Someone read from their phone that the mask mandate was not a law, and argued it was their constitutional right to be there.

The township police officer read an email from Columbia County District Attorney Thomas Leipold explaining they could be charged with defiant trespass. He then said to everyone in the cafeteria, “How about I give you a chance to talk amongst yourselves then?” court documents state.

Some in the group had a presentation for the board about the danger of children being masked all day. They asked if those without masks would be willing to leave so they could make the presentation.

“We said absolutely, and we left. No escort. No defiant behavior. They had not started the school board meeting until we left, so technically we did not attend the meeting,” Barnhart said.

While some protested wearing a mask, most put them on. Detwiler, Barnhart, and Krum left before the executive session was over.

Not much happed for three weeks. Then Detwiler, Barnhart, and Krum each received notice in the mail from the district attorney that they were being charged with defiant trespass.

Becker said the Commonwealth of Pennsylvania is pursuing these cases because Detwiler, Barnhart, and Krum broke the law.

“Whether you are unruly at a school basketball game or at a school board meeting, if you are asked to leave by a school official, you are required to do so or be subject to an arrest for defiant trespass. This is what has happened with this incident.”

Together, the three accused went to Williamsport-based attorney Gregory Stapp who told The Epoch Times the school’s argument seems to be that they didn’t leave quickly enough.

As the cases moved through the court system, the parties were asked to address whether a school district should have the power to implement a rule that requires visitors, students, and staff to wear a mask.

In his opinion, Judge Gary E. Norton in the Columbia–Montour County Court of Common Pleas ruled that the board was within its power to mandate the wearing of masks in school buildings, including at board meetings.

But the question of the school having authority was already being argued in a higher court.

“This issue is already being argued before the Commonwealth Court of Pennsylvania in the case of R.M. v. Secretary of the Pennsylvania Department of Education Noe Ortega at No. 49 MD 2022. In that appeal, the issue before the Commonwealth Court is whether a school district or a school board has the authority to require masking as a sanitary regulation,” Stapp argued in court papers.

He is now asking the Pennsylvania Superior Court to rule in the case. Because the question is already being argued before the Commonwealth Court, it is important that the Superior Court also hear it, Stapp said, because if the lower court’s opinion is allowed to stand it would create a precedent of allowing school districts across Pennsylvania to implement health laws instead of the Pennsylvania Department of Health or the Legislature.

“Where’s the line? They can mask but they can’t do vaccines?” Stapp says allowing school boards to impose health rules on the public is a slippery slope. “It shouldn’t be in the hands of the school board, period.”

Detwiler told The Epoch Times the legal process has been expensive. The three defendants have set up an online fundraiser for legal fees.

“I think we’re at almost $5,000 a piece at this point and it’s nowhere near being over unless this just goes away,” Detwiler said. “It’s a financial hardship on us. It’s bad. None of us are rich. We’re all working people.”

“I feel a lot of anger. I feel the most, a lot of disgust. This is where we drew the line,” Detwiler said. “And it’s going to get worse for our children if we don’t do something.”