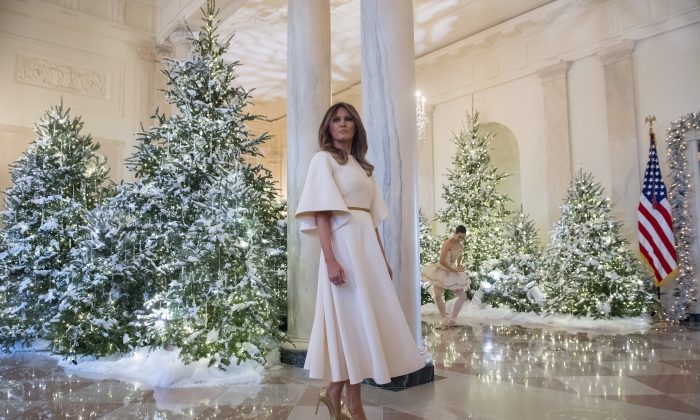 America’s top woman celebrated a milestone on April 26 and one newspaper has paid a tribute to her flair for impressing people around the world with her fashion, grace, and style.

In celebration of Melania Trump’s 49th birthday, The Daily Caller compiled an album of the First Lady’s many memorable moments.

“Over the last two years, our always gorgeous FLOTUS has continuously impressed and wowed people all over the world with her incredible fashion sense, grace, and style,” the website reported.

Melania is the second first lady born outside of the United States, according to the White House website, and the only first lady to become a naturalized U.S. citizen.

An active member of her community, she has served as chairwoman of the American Heart Association, which raised $1.7 million for research. She has also launched her own jewelry collection and previously worked in modeling.

As first lady, Melania has devoted her time to many issues affecting children who are patients at hospitals and care centers. During the Easter holiday she made a surprise visit to St. Mary’s Medical Center bringing Easter baskets to the children in Palm Beach, Florida.

At pediatric hospital Bambino Gesù in Italy’s Vatican City she met with a boy who was waiting for a new heart. When she arrived in Belgium the next day, Melania heard the hospital had found a donor for the boy and celebrated the news in a press statement, saying “my own heart is filled with joy over the news.”

She has used her status as first lady to raise awareness about the dangers of opioid abuse and the devastating effects on infants and unborn babies. Melania traveled to Huntington, West Virginia, where she visited Lily’s Place, a non-profit infant recovery center that helps give infants born dependent on drugs opportunities to thrive.

She has also joined multiple opioid summits and continues to work with the Trump Administration on raising awareness of opioid abuse and ways to protect children from it.

Melania has more recently championed a Be Best awareness campaign that promotes the wellbeing of children through monitoring their social and emotional health, social media’s effect on children, protecting the vulnerable from the effects drug abuse, and educating parents about the detrimental effects of opioids.

“She truly shines no matter what the occasion,” The Daily Caller reported. “Most recently, FLOTUS got everyone’s attention when she stepped out in a beautiful white and black polka dot dress on her way to the annual RX Drug Abuse and Opioid Summit with the president.”

She has also turned heads while joining President Trump on his official visits to many countries.

“Whether she was joining President Trump and other leaders in places like Beijing or welcoming leaders like South Korea President Moon Jae-in and his wife Kim Jung-sook to the White House, she is always a terrific example time of the greatness of America,” the website reported. “Most recently, she joined Second Lady Karen Pence for a trip to Fort Bragg where they thanked military members and their families for all they do for our country.”

Melania has said she doesn’t regret moving to the White House and that she would happily serve a second term as it is such a “great honor.”