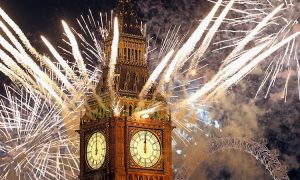 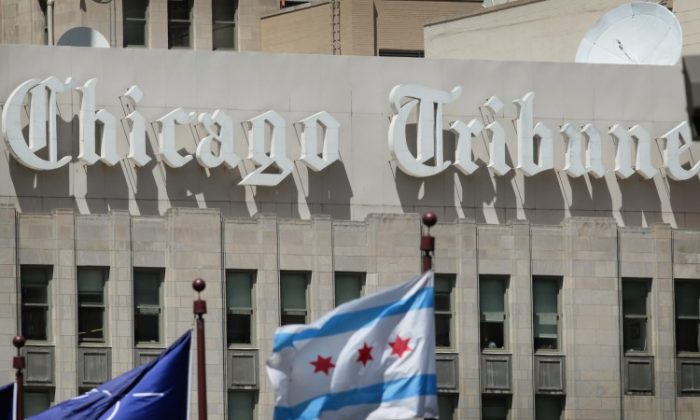 The Tribune Tower, headquarters of the Tribune Company, is seen on June 7, 2012 in Chicago, Illinois. Tribune emerged from Chapter 11 bankruptcy on Dec. 31 and plans to sell majority of its newspaper holdings. (Scott Olson/Getty Images)
Business

Media and newspaper giant Tribune Co. emerged from its four-year Chapter 11 bankruptcy on Monday, with a renewed focus to grow its television business, and an intention to sell off most of its newspaper holdings.

“Tribune emerges from the bankruptcy process as a multi-media company with a great mix of profitable assets, strong brands in major markets and a much-improved capital structure,” said Eddy Hartenstein, Tribune’s chief executive officer, in a statement.

Tribune also closed a $300 million revolving credit line and a $1.1 billion term loan as part of its bankruptcy exit.

Selling Off Newspapers
In the process of its bankruptcy proceedings, Tribune has installed a new board with several television executives, including former Fox Broadcasting Co. Chairman Peter Liguori. Liguori is also likely to become Tribune’s new chief executive.

Tribune will begin a process to sell off most of its newspaper holdings—its former bread-and-butter business which propelled the company to prosperity—including the LA Times, the Chicago Tribune, and the Orlando Sentinel.

While readership and advertising revenues have fallen across the board in the print newspaper industry, Tribune’s paper assets are still profitable, despite lower consumption and smaller footprints, and could garner millions at an auction.

Likely buyers could include News Corporation, run by Rupert Murdoch, or Warren Buffett’s holding company. According to Reuters, Aaron Kushner—who runs the Orange County Register—and Doug Manchester—who runs the San Diego Union-Tribune—are likely interested in purchasing some of Tribune’s properties. The LA Times also reported that a local politician and former venture capitalist, Austin Beutner, will be interested in pursuing the LA Times.

Bet on Television
Tribune will focus its energies on growing its television business. Last year, its broadcast business generated $1.1 billion in revenues.

The company has 23 local TV stations in 19 cities, as well as a national network that feeds content. Its station properties include KTLA in Los Angeles, WGN-TV in Chicago, and WPIX in New York. WGN America is a Chicago-based national network that has the potential to add millions of subscribers, especially considering its popular broadcasts of Chicago Cubs baseball and Chicago Bull basketball games.

Hedge fund Oaktree Capital Management is the biggest shareholder in Tribune, with a 23 percent stake. Angelo, Gordon, & Co. and J.P. Morgan each hold a 9 percent stake.