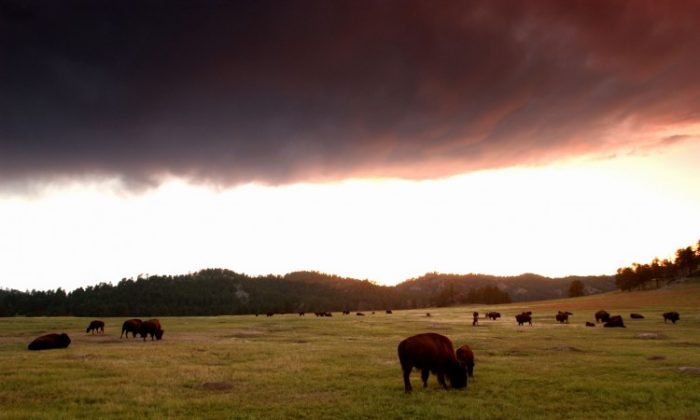 In this file photo, a herd of bison roam the Wind Cave National Park in the southern Black Hills of South Dakota. A group of Native American tribes have raised $9 million to purchase land in South Dakota’s Black Hills. (David McNew/Getty Images)
US

A group of Native American tribes have raised $9 million to purchase a piece of sacred land in South Dakota’s Black Hills, it was reported this week.

“We are happy that we can share in this success because it sends a powerful message to us, to our own people, but it also sends a powerful new narrative to the world,” Chase Iron Eyes, a local man who helped raise funds, told KXNews.

The several-monthlong fundraising allowed natives to buy 2,000 acres of Black Hills land, known as Pe’ Sla to the Sioux, reported the Argus Leader.

“We did not wait for the United States to deal with us justly on our Black Hills rights. We acted now, exercising our inherent sovereign authority to protect this most sacred site,” read a joint statement from several tribes, according to the Leader.

The land has been owned by the Reynolds family since 1876, but the family decided to auction it off in August, according to KXNews.

“In a sense everyone was able to rally behind the Great Sioux Nation and we haven’t felt that sense of people rallying behind us for a long, long time,” Iron Eyes told KXNews.