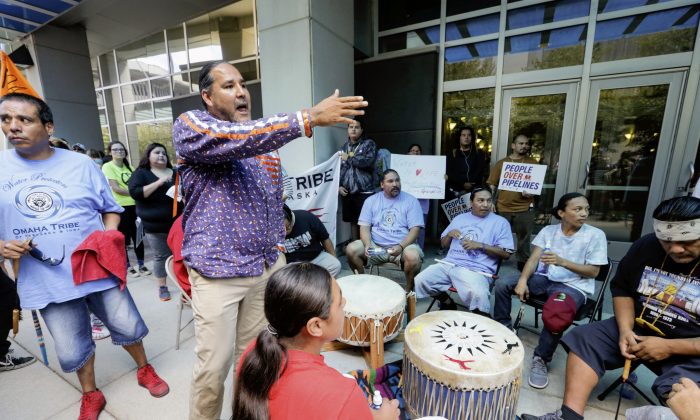 Sam Grant of the Omaha tribe addresses members of the Ponca, Santee, Winnebago and Omaha Tribes in Nebraska and Iowa along with others during a rally on Thursday, Sept. 8, 2016, in front of the Army Corps of Engineers offices in Omaha, Neb., to protest against the Dakota Access Pipeline in the Dakotas and Iowa. A judge is expected to rule Friday on whether to block construction of the pipeline that is supposed to pass close to the tribal reservation near the North Dakota-South Dakota border. (AP Photo/Nati Harnik)
US

Tribe Challenging Pipeline Has Some Advantages in Courtroom

OMAHA, Neb.—The American Indians challenging an oil pipeline that would cross four states have some legal advantages in a courtroom, particularly their tribe’s status as a sovereign nation with long ties to the land in question.

But stopping a major project like the Dakota Access pipeline after construction has begun is difficult, and even if the Standing Rock Sioux win in federal court, the end result might simply be an altered route.

A judge is expected to rule Friday on whether to block construction of the pipeline that is supposed to pass close to the tribal reservation near the North Dakota-South Dakota border. No matter what the court decides, opponents seem prepared for a long fight, following many of the same tactics used to defeat the Canada-to-Nebraska segment of the Keystone XL pipeline.

The tribe’s lawsuit alleges that the Dakota Access pipeline violates several federal laws, including the National Historic Preservation Act, and threatens the region’s water supply and sacred ancient sites outside of the 2.3-million acre reservation.

The tribe argues that the Corps should not have used a streamlined permit process when it reviewed the pipeline and that engineers did not do enough to consult with tribal members about the $3.8 billion project as required by the historic-preservation law.

The Corps disputes those allegations.

The consultation requirement is an example of how the tribe’s status as a sovereign nation could give it more influence, said Tom King, a consultant who has worked with tribes and businesses on historic-preservation issues for roughly five decades.

As a sovereign nation, the tribe is entitled to a formal process for airing any concerns. That process does not apply to a nearby rancher, for instance.

Other tribes have prevailed under similar circumstances.

Earlier this year, federal officials cancelled an oil and gas lease in northwest Montana because the Blackfoot tribes of the U.S. and Canada said the project would disturb an area they consider sacred.

The 1,172-mile Dakota Access project gained enough state and federal approvals to begin construction this summer on some sections of the route through North Dakota, South Dakota, Iowa and Illinois. Some of the work is on hold until the judge rules.

The success of the fight against the failed Keystone XL pipeline has emboldened environmental groups, said Indiana University professor David Konisky, but he does not think the protests and lawsuits will stop the Dakota Access project.

“I suspect it will be delayed and possibly changed, but all indications are it will be built,” said Konisky, who studies public policy and has written a book about public attitudes on energy.

This week’s ruling isn’t likely to settle the dispute. Appeals are likely no matter who wins this round.

There have been other legal challenges and protests of the pipeline, with the most aggressive ones in North Dakota and Iowa. Several dozen protesters have been arrested after chaining themselves to construction equipment or otherwise trying to block the work.

The fight over the Keystone XL lasted seven years. Forcing a significant delay in the Dakota Access project might be considered a victory in itself.

“Delays are often critical elements to victory. It’s a death by a thousand cuts. If there are so many delays and frustration on the overall project, you have a better chance of it not going through,” said Omaha attorney Brian Jorde, who helped develop the pipeline-fighting plan while representing Nebraska landowners fighting Keystone XL.

Jorde was part of a group that gathered over the summer in Atlanta with environmentalists and landowner-rights groups to build support for future pipeline battles.

Other pipeline projects such as the Constitution pipeline in New York and Pennsylvania and the Palmetto pipeline in the Southeast have encountered strong opposition, said University of Minnesota professor Alexandra Klass. Both South Carolina and Georgia recently banned the use of eminent domain to secure land for oil pipelines.

“Environmental groups didn’t used to be that involved in oil and gas pipelines,” said Klass, who specializes in energy law. “Now there is much more of a greater focus on making it difficult to transport fossil fuels, so that we can move more to renewable energy. So you have new alliances over climate change between national environmental groups and landowner groups that you didn’t see 10 years ago.”

The strong opposition to a project like the Dakota Access pipeline can polarize public opinion about it, said Mark Barteau, director of the University of Michigan’s Energy Institute. That can make it hard for any energy infrastructure project to be approved.

“It’s become increasingly difficult to look at projects like this,” Barteau said, “and evaluate them on their merits and costs and benefits.”