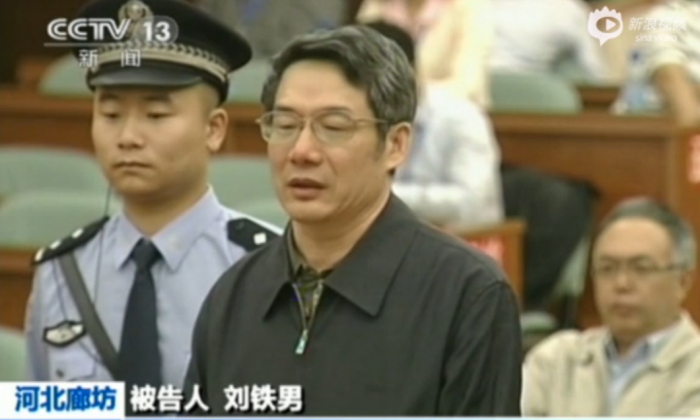 Liu Tienan, disgraced former vice chairman of the National Development and Reform Commission, gives a statement during his trial on Sept. 24, 2014. (Screenshot/CCTV)
China

A colorless former Chinese communist official who last sat second-in-charge of China’s economic planning agency went to trial on Wednesday at the Intermediate People’s Court in Langfang City of northern China’s Hebei Province, facing a charge as mundane as the figure he cut out in the courtroom: accepting nearly $6 million in bribes.

The 59 year-old Liu Tienan was former vice chairman of the National Development and Reform Commission, an enormously powerful economic agency that dispenses permissions and directs funds to countless projects across the country. Observers said that the bribes Liu had likely extracted were far greater than the figure brought to court—but in the Communist Party’s crusade against corruption, showing amounts that are too high would do poorly for propaganda purposes.

Liu was also former chairman of the National Energy Administration.

The accusation says that Liu abused the power of his posts to gain profit for himself and also his son, Liu Decheng. The son was said to have received bribes to establish a company, plus millions of shares from an automobile trading firm, a luxury villa, and a Porsche car worth $2.7 million in total. The son also gained over $1.6 million cash, a Nissan Teana car worthing $55,000, and an official sinecure that gave him a salary of $200,000—an extraordinary yearly income in China—and much more.

Liu plead guilty to all of the accusations and raised no objections, according to state news media. He even shed tears in court, saying that he has experienced “painful repentance and remorse” over the past year.

Liu was investigated by the authorities in May 2013 and purged from the Party in August of that year.

In an unusual twist to usual court proceedings, the prosecutors spoke out on Liu’s behalf. They said he had a “good attitude” from the beginning of the investigation. Over $3 million in bribes that the authorities didn’t recover initially was confessed to by Liu on his own initiative, they said. Liu and his family also disgorged the $5.6 million in bribes as a gesture of cooperation, the prosecutor added.

Liu even penned an essay suggesting how to effectively implement anti-corruption measures, hoping to redeem himself by doing a good deed, according to the court.

Liu’s full confession may bring panic to officials with whom he has close ties, especially the powerful Party officials that brought him up through the ranks. These include, in particular, former Chinese Communist Party leader Jiang Zemin, who ruled China from 1989 to 2002 and maintained his influence in the Party and government for another decade after that. On the Chinese Internet Liu has been called a “financial gatekeeper” for Jiang’s network.

Chinese observers see the formal punishment of Liu as another move in rolling back the influence of Jiang Zemin over China. Jiang is seen as the biggest “tiger” behind sacked officials like Liu Tienan, because parts of China’s economy had for years been in the hands of officials loyal to Jiang, including parts of the National Development and Reform Commission, the state oil companies, parts of the state energy system. Those areas have also been the focus of Xi Jinping’s anti-corruption campaign, with a series of officials aligned with Jiang purged from those units.

The verdict against Liu will be announced soon, the court said. His prodigal son faces a separate trial.