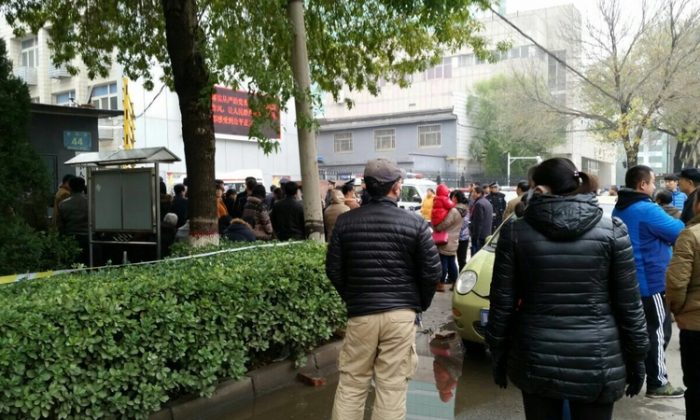 Plainclothes police surround a court building in Cangzhou City, northern China, on Nov. 9, 2015. Nine practitioners of Falun Gong are standing trial for meeting in a room and talking with one another on Aug. 17, 2014. (Epoch Times)
China

In December 1999 practitioners of the spiritual discipline Falun Gong were for the first time paraded into a Chinese court for a show trial, a bit of theater meant to formalize the state persecution that had begun that July. The four practitioners were denied lawyers, their cases were dealt with summarily, and the sentences were heavy: 18, 16, 12, and 7 years of imprisonment.

Now, after 16 years of grinding suppression, another mass trial is being conducted, this time in Hebei, the province surrounding Beijing. On the surface it would seem that little has changed—yet in the intervening years, layers of complexity have accumulated for the authorities: The case touches on Communist Party intrigue, dozens of rights lawyers have become involved, and central judicial authorities have dispatched observers to monitor the progress of the trial.

A remarkable aspect of the case is that the nine individuals now on trial in Cangzhou are accused of doing little more than meeting in a room and talking with one another.

On Aug. 17, 2014, they were part of a group of 42 Falun Gong practitioners that held an experience-sharing conference, known in Chinese as a “Fahui.” Practitioners, who numbered between 70 million and 100 million in China before the persecution began, hold Fahui events regularly around the world.

Gathering in auditoriums they share their progress in self-cultivation—the process of personal improvement and internal alignment with the practice’s teachings of truthfulness, compassion, and tolerance.

Such events, practitioners said, serve as encouragement to persist in the practice’s teachings in the face of harsh persecution in China.

Police raided the Cangzhou venue, and indicted 9 of the 42 for “undermining the law”—the Party’s catchall charge against practitioners of Falun Gong.

When the nine were arraigned in court on Nov. 9, the trial’s opening day, 12 human rights lawyers were there to represent them.

“To my understanding, my clients really didn’t do anything, be it from the legal angle, or logical angle,” said attorney Han Zhiguang. The nine had merely gathered in a room to talk with others.

“I believe they are innocent.”

The backbone put up by the lawyers seemed to “shock” the presiding judge, according to Gao Chengcai, one of the defense attorneys, who spoke to the Epoch Times following the close of the trial on Nov. 13. The verdict has not yet been announced.

“They appeared pressured by the robust defense mounted by the human rights lawyers, because they have rarely experienced this sort of thing,” Gao said.

The various heads of provinces and cities attending the trial also appeared “very moved” by their staunch arguments, which were made entirely “in accordance with the law,” Gao added.

The first two days of the trial had proceeded “strictly in accordance with the criminal law procedure,” according to Han Zhiguang.

We know these practitioners are innocent. We must help them.
— Bus driver who signed petition to release Falun Gong practitioner in Cangzhou

Han, Gao, and others on the case were there despite attempts by authorities to intimidate them. A number of the lawyers did drop the case, succumbing to pressure from Cangzhou officials and the heads of several law firms, according to Minghui, a Falun Gong website.

The lawyers took on the case in a climate of increasing violence against members of their profession. Amnesty International, a human rights NGO, published a report on Nov. 12 detailing the torture taken against lawyers recently taken captive in China.

Those who defend Falun Gong, a highly politically sensitive topic, have historically been at particular risk. The campaign against the practice is among the most severe political persecutions in China, with tens of thousands, or more, suspected of having been killed through detention, torture, and the harvesting of practitioners’ organs for profit, according to researchers.

Gao Zhisheng, one of the first Chinese rights lawyers to defend Falun Gong, was badly tortured and abused for years, and remains under house arrest. Others, such as Wang Yu and Zhang Kai, are currently in detention.

Another layer of background related to the case is the location: Hebei.

Until July 24, 2014, Hebei was the bailiwick of Party Secretary Zhou Benshun, who had a reputation for manipulating the courts; vigorous defenses like those in Cangzhou were rarely heard when he was in charge.

Zhou’s predations were noted in a state-run online news outlet before he was purged last year. In an exclusive report, The Paper said that the Hebei Public Security Bureau had closed circuit cameras prominently installed above the judges’ desks in courtrooms, indicating that Zhou was monitoring members of the very judiciary he ultimately headed.

Zhou was also a known loyalist of former security czar Zhou Yongkang (no relation). That made Zhou Benshun part of the broad Party factional network grouped around Chinese leader Jiang Zemin, who launched the persecution of Falun Gong.  Jiang brought many officials up through the system on the basis of their seriousness in implementing it.

Lawyer Han Zhiguang said “management level” staff from Beijing’s Department of Justice were in attendance at the proceedings on Nov. 9. They instructed the defense lawyers to “strictly follow proper legal procedure” and “don’t make trouble or be provocative,” he said. These appear to have been the ground rules for the vigorous defense the lawyers mounted for their clients.

Chen Simin, an editorial writer for the Chinese language edition of Epoch Times, has suggested that the presence of judicial officials was to send a message to local authorities that their conduct was being scrutinized.

Party authorities in Beijing have taken a series of measures since Xi Jinping came to power to centralize control of the court system, an apparent attempt to keep local officials—the Zhou Benshuns of China—from interfering in cases.

Despite the official presence from outside Hebei, irregularities started to surface on the third day, according to lawyer Ren Quanniu.

The presiding judge and the other judges rushed proceedings, and only allowed one lawyer to present a statement per defendant for each criminal evidence brought up. Standard legal procedure mandated that all lawyers and defendants are allowed to make statements.

When the lawyers tried to raise objections, the judge slammed his mallet, and cautioned them against “disrupting order in a court.”

“Ever since the recent criminal law amendments on the mainland, the article ‘disrupting order in a court’ has hung like a sword above lawyers’ heads,” Ren said.

Local policemen, plainclothes officers, and special police surrounded the courtroom, delaying traffic and diverting pedestrians who stopped to gawk, while local agents of the security bureau were keeping watch for Falun Gong supporters.

Earlier this year, local Falun Gong practitioners initiated a signature drive calling for the release of the nine. This received strong support. By mid-June, 4,300 Cangzhou residents had put their names and thumbprints in red ink on the petitions. A red thumbprint is a traditional way to sign an important document.

“We know these practitioners are innocent. We must help them,” said a bus driver who signed the petition, Minghui reported.

The open support accorded the practitioners by Cangzhou residents would have been unthinkable in the early years of the persecution, and at that time lawyers, even if they volunteered, were denied the chance to serve as defense attorneys in Falun Gong cases.

What the effect of all this will be on the sentences is unclear.