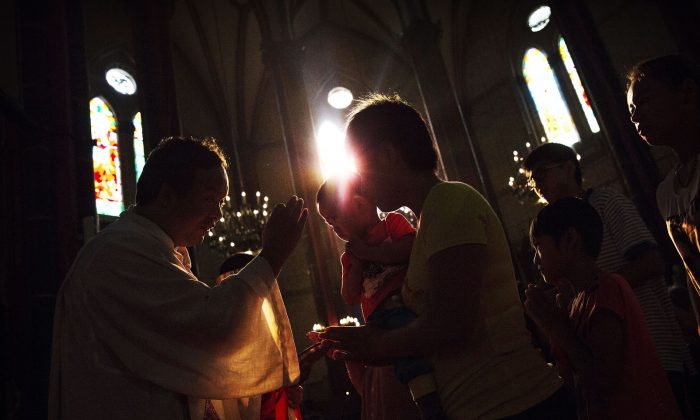 A Chinese Catholic woman takes communion from a priest during a service for the Assumption of the Virgin Mary at a government sanctioned church on August 15, 2014 in Beijing, China. (Kevin Frayer/Getty Images)
China

Once a gang leader whose authority extended through nine counties in southeast China, Huang Chuanchan died not protecting his accomplices, but a Bible.

Li spoke about Huang’s death on Feb. 14 at a conference held by Canadian Core Value Guardian, an organization run by Chinese expatriates in Canada.

Huang died in February 2013 after being severely beaten by prison guards. Towards the end of the previous year, they had discovered his Bible in a search of his personal items. They ordered Huang to hand it over, but he refused. Eight guards then beat him until he went into shock.

Prison staff sent Huang to the on-site hospital, where he eventually died at the age of 36. Two forensic experts said that he had been beaten to death, but in their report changed the official cause of death to “sudden death following heart attack.”

From Crime Boss to Christian

In an article memorializing Huang, Li describes how he introduced him to Christianity while both of them were in jail. He maintains that the crime boss, whose operations extended throughout Fujian Province, had not committed any murders and that the charges by the police were fabricated.

While in prison, Huang and other inmates would preach lessons from the Bible. They managed to obtain a radio, which they used to listen to forbidden stations like Voice of America, Radio Free Asia, or Sound of Hope Radio.

China Buys Heaters for Seniors, but Confiscates the Remote Controls

Study of the Bible was forbidden by the prison staff. Offenders risked lengthened prison terms.

Huang Chuanchan’s family refused to accept the results of the autopsy and took the matter to the prison authorities. Zhang Fafu, a fellow convict who witnessed Huang’s death, composed a written testimony that includes his personal information and red ink fingerprint signature.

In China, the communist regime claims authority over all religious and spiritual groups. There are only five legal religions, including Communist Party-run Protestant and Catholic churches. Independent Christians like Li and Huang are targeted for suppression and disinformation.

Li Jianfeng warned about the propaganda tactics used by the Party to defame its opponents, including Christians and adherents of Falun Gong, the Buddhism-rooted spiritual practice that has been persecuted since 1999. He advises those persecuted for their beliefs to simply ignore official propaganda rather than to give it an audience.