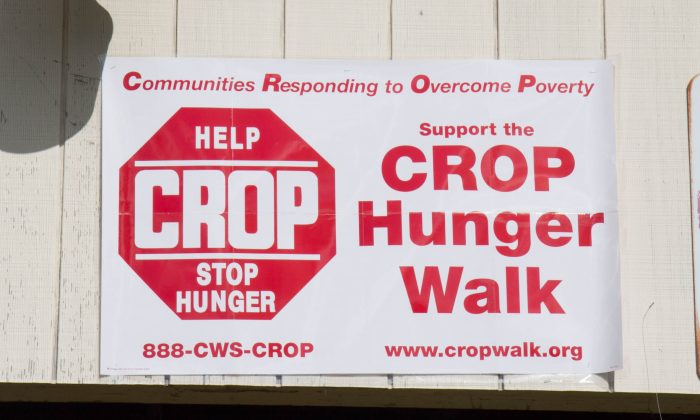 The sign over the pavilion in Airport Park in Matamoras where the CROP Walk participants gathered on Oct. 18, 2015. (Holly Kellum/Epoch Times)
New York

Despite snow and wind, over 120 people came out to walk
By Holly Kellum

MATAMORAS—Despite the first frost and first snow of the season, 122 people came out to walk in the Tri-State CROP Walk on Oct. 18.

One of the organizers, Linda O’Donnell, said the weather does affect the turnout but the walk goes on every year rain or shine, “because people who walk to get water do it every day no matter what the weather is.”

The walkers, many of them wearing yellow CROP Walk T-shirts, started in Airport Park in Matamoras then followed one, two, and three mile routes in Matamoras and Port Jervis. The walkers raised money through sponsors who donated for the walkers’ participation, independent of how far they walked.

This is the ninth year for the Tri-state CROP Walk and, since it started, it has raised over $100,000. This year alone the walk raised over $12,000, 25 percent of which goes to eight local food pantries in the tri-state area. The other 75 percent goes to Church World Service, an international charity organization whose mission is to “feed the hungry, clothe the naked, heal the sick, comfort the aged, and shelter the homeless,” its website says.

Carol Eckes, the owner of the Seventh Day Adventist Food Pantry in Sparrowbush is one of the recipients of this year’s CROP walk donations. The pantry feeds between 1,200-1,500 a month and every month they get about a dozen new people. “We’re very, very busy,” she said.

“Just by doing the walk,” said O’Donnell, “you just show by walking—it calls attention [to the issue].”

This article was updated  with the total number of walkers and the amount raised.