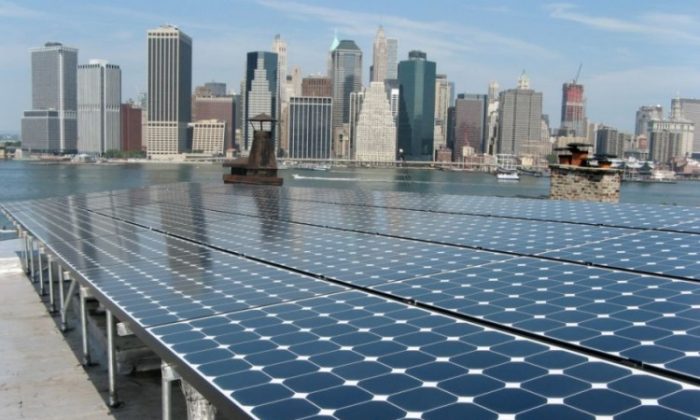 Solar panels installed by AeonSolar on a building in Brooklyn Heights. (Courtesy of AeonSolar.com)
US

NEW YORK—Electricity is a policy driven business, and to maintain long-term sustainability, those in the industry must rely on the government for success. New York, New Jersey, and Connecticut all have different state policies in place, each with varying results.

At a recent panel hosted by the Regional Plan Association, experts in the solar energy field from the tri-state area discussed how the current policies were affecting the industry and why having a long-term plan in place is best for long-term success.

“When we look at a market and decide whether to invest in people, and infrastructure and inventory, we want to be sure that that program will be there, not just this year and next year, but for the long haul,” Fred Zalcman, managing director of government affairs at SunEdison said while on the panel last Wednesday.

All of the panelists repeatedly spoke of how difficult it was to have business in a state without long-term policy because it does not create consistent work; a problem they called “start-stops.”

“It is just horrible. It is not good for the companies and it is not good for state job creation,” said Christin Cifaldi, manager of clean energy deployment at Connecticut’s Clean Energy Finance and Investment Authority.

Policy planners from the tri-state region have watching each other and learning from the successes and failures. Here is a snap shot of where each state is on policy and how it is working according to the experts:

649 megawatts installed
In 2010, the New Jersey Legislature created a long-term policy with ambitious yearly megawatt targets, which they have not missed. Consequently, New Jersey is currently second in the nation behind California in solar installed and year over year market growth, according to a policy brief released by the Regional Plan Association.

The rapid growth however, has not come without its problems. “The New Jersey market is almost a victim of its own success,” Zalcman said by phone on Tuesday. Supply now exceeds demand, causing the price of renewable energy credits to bottom out. A few years ago, pricing was close to $600 per megawatt hour and now it is near $100, according to Jim Torpey, director of market development at SunPower Corporation.

Legislation is working its way through the legislature to help stabilize the market and correct the “stop” pattern the current policy has created.

108 megawatts installed
New York does not have a long-term policy in place and the market currently caters to mostly smaller residential projects as opposed to larger commercial ones.

The New York Solar Jobs Act has long-term goals out to 2025, but is still awaiting approval by the Legislature. Gov. Andrew Cuomo proposed the New York Sun Initiative, which appears more likely to pass, but it only provides goals through 2015.

New York has a much larger sized market and the highest electricity prices in the area. Zalcman does not think the governor’s short-term plan is ideal, but believes New York has promise. “The value of solar is much greater. Given the long-term potential, there is a lot of interest,” Zalcman said.

24 megawatts installed
Connecticut recently passed new solar policy in summer of 2011, but it still has not gone into effect. On paper it appears to be the most promising in maintaining steady growth.

According to Cifaldi, the Connecticut Legislature saw what happened in New Jersey with supply exceeding demand and created a policy to address those issues. First they put a cap on the price at $350 per megawatt hour. Second, for those signing contracts, the price per megawatt is guaranteed for 15 years. Third, the plan is monetary based—about $8 million per year—as opposed to megawatt goals.

The current policies are a work in progress, but Zalcman is optimistic things will work out for the tri-state region.

“People think of California and the Southwest as place for solar. As each program takes hold and expands, the Northeast is becoming a key market. Each state is doing things differently and hopefully there is an opportunity to develop best practices and replicate them across the region,” Zalcman said.