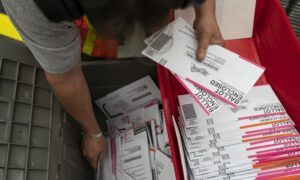 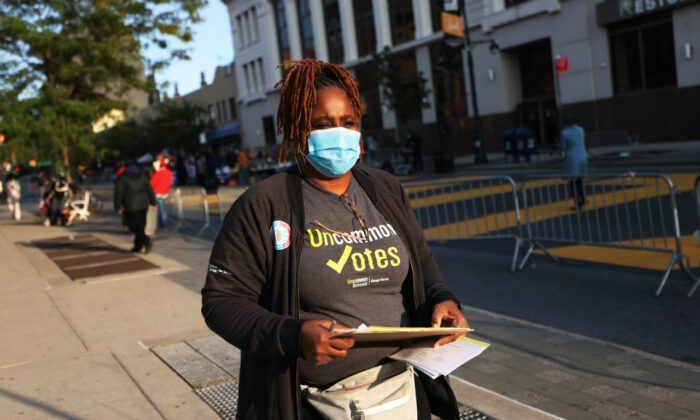 Natasha Cherry-Perez, senior associate director of community engagement with Uncommon Schools, walks the streets as she helps people register to vote on Sept. 22, 2020, in the Crown Heights neighborhood of Brooklyn. (Michael M. Santiago/Getty Images)
US Features

Communist organizations in the United States organize groups that systematically focus on potential voters who rarely vote, such as minorities, low-income workers, and young people, to encourage them to vote for Democrats.

These groups register them to vote and provide transportation to polling stations, says author and filmmaker Trevor Loudon, who has researched radical left, Marxist, and terrorist movements and their covert influence on mainstream politics for more than 30 years.

While it’s legal to provide voter registration services, some voter registration groups work with foreign actors such as the Chinese Communist Party (CCP), Loudon said in an interview during The Epoch Times’ investigative documentary about the 2020 election.

There are communist organizations in America that owe allegiance to the CCP, including Liberation Road and its subgroups LeftRoots, the Communist Party USA, and others, he said.

These groups have been involved for several years in “setting up voter registration groups in key states, states that could be flipped from Republican to Democrat,” Loudon said.

The groups target minority voters who lean Democratic but don’t normally vote often, and seek to convince them to get to the polls, Loudon said.

Liberation Road is a socialist organization that draws from Marxist, Leninist, and Maoist ideologies, “with a clear focus on building the resistance to Trump,” its website says. “We learn from the Chinese leader Mao Zedong, with his insistence that all correct ideas come ‘from the masses to the masses.’”

A project in San Francisco called “Seed the Vote” organized volunteers to defeat President Donald Trump and win the Senate, according to its website. Loudon says Seed the Vote is “a front for the Chinese Progressive Association (CPA) in San Francisco, which is a big voter registration group [and] community organizing group.”

Founded in the 1970s, CPA has close ties to the Chinese Consulate in San Francisco and “has always been a tool of the Chinese Communist Party,” Loudon said.

The organization registered hundreds of thousands of voters who typically don’t vote and helped them get to the polls, Loudon said, adding that “they openly claim credit for winning the election for Biden.”

One of the key people of Seed the Vote is Alex Tom, a former executive director of the CPA in San Francisco, who “openly boasts about his deep connection to the Chinese officials in the city. He talks about how he has regular conversations with them, he runs his positioning past them,” Loudon said.

Tom said in a video featured in the Epoch Times documentary, “China has had a very important role in funding left experiments, and we have a relationship with the Chinese Embassy, like we actually have, so you know, I’ve had to have various conversations with them about our positioning.”

Tom is currently executive director of the Center for Empowered Politics, which has ties with the CPA in San Francisco, according to Loudon. Tom is also the United States’ Soros equality fellow at the Open Society Foundations, which was founded and is chaired by George Soros.

Seed the Vote didn’t immediately respond to a request by The Epoch Times for comment.

Flipping Virginia to Blue From Red

In Virginia, a group called New Virginia Majority (NVM) has been working on voter registrations for over 10 years and took credit for flipping Virginia state to Democrat from Republican, Loudon said.

NVM said in a statement after the 2019 election: “With a remarkable turnout for an off-off election year, Virginians elected a majority of Democrats to the General Assembly. For the first time since 1993, Democrats govern all three legislative bodies.”

“In 2019, we knocked on over 500,000 doors, and we talked to voters about protecting their healthcare, and ensuring their children are safe in their neighborhoods and schools, regardless of where they live or where they come from,” Maya Castillo, New Virginia Majority’s political director, said in the statement.

“Voters want to see themselves and their communities reflected in the people they elect to govern Virginia and were very clear in making that choice at the polls.”

NVM co-Chair Tram Nguyen published an op-ed in The New York Times, titled “Democrats could learn a lot from what happened in Virginia.”

“We try to reach voters of all colors, women, low-income workers, and young people where they are,” she wrote.

“We organized formerly incarcerated women and men to help them demand that their full civil rights be restored,” including voting rights, Nguyen said. “They were a key voting bloc [in 2016] in Virginia, the only Southern state that Hillary Clinton won.

“Part of the failure of the Democratic Party and many mainstream political organizations in the past has come out of their belief that these communities weren’t worth investing in,” she said. “We don’t just sweep in and register voters before an election; we are registering people every day.

“And we talk to people, all year, about issues that are important to them: affordable health care, access to a good education, reforming the criminal justice system, protecting voting rights, and making sure our communities have clean air, water, and public lands.”

Loudon wrote at the time for The Epoch Times, “NVM has sent hundreds of paid workers and volunteers out across the commonwealth to register and send to the polls hundreds of thousands of new voters—all under the nose of the Virginia Republican Party.”

To identify potential voters, NVM used GIS (Geographic Information System), a very sophisticated technology, to present voter demographic data such as ethnicity, voting patterns, and income levels in the form of a map, Loudon said. GIS maps can be interactive and allow the user to build large and complex queries.

GIS maps used by NVM to identify specific precincts and districts where the number of voters who could potentially vote for Democrats was high were generated by Stephen McClure, a U.S. research associate working at Wuhan University in China, Loudon said.

McClure posted in his blog in 2011: “I have been recently working with New Virginia Majority to make a series of maps to inform planning for precinct walks in Virginia Statehouse districts. … The results are subjective but do suggest … the ways that actual communities conform or diverge from the discrete territorial units which define an electoral terrain in a democracy.”

McClure works at a Chinese university “using Chinese equipment, using Chinese computers, probably paid a salary by the Chinese Communist Party to basically interfere in American politics,” Loudon said. “So this is happening right under our very noses.”

NVM co-founder and co-Director Jon Liss is a longtime member of Liberation Road, Loudon wrote for The Epoch Times.

“George Soros alone has put something like $18 billion into the left in the last three or four years. That buys a lot of votes, that sets up a lot of voter registration groups, that buys a lot of buses to ship people to the polls,” Loudon said. “What these people are doing is legal, and it’s not illegal to sign up voters or get them to the polls, but they’ve worked with organizations that definitely have histories of … illegal voting activity, vote fraud.”

Moreover, some organizations supported financially by the money donated by Soros “are working with entities connected to the Communist Party of China, [and] that puts a whole different spin on it,” he said.

In 2017, Soros donated “$18 billion of his fortune toward funding the future work of the Foundations, bringing his total giving to the Foundations since 1984 to over $32 billion,” according to the Open Society Foundations’ website.

“Every year, the Open Society Foundations give thousands of grants to groups and individuals that work on the issues we focus on—promoting justice, transparency, and open debate,” the foundations’ website says.

The Open Society Foundations didn’t immediately respond to a request by The Epoch Times for comment.