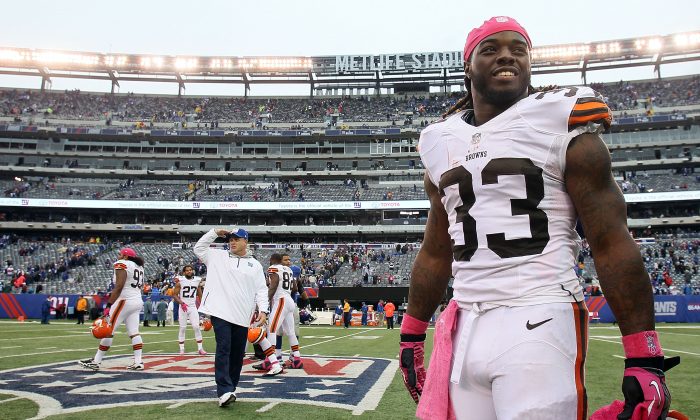 Trent Richardson has averaged just 3.3 yards per carry over his three-year career in the NFL. (Alex Trautwig/Getty Images)
NFL

The Oakland Raiders have released talented running back Trent Richardson—the third overall pick in the 2012 NFL Draft. Given that Oakland was Richardson’s third team in three years after the Browns, who originally drafted Richardson, dealt him to the Colts in 2013 in exchange for a first-round pick, it was not unexpected at this time.

But it would have been unexpected if you told most any NFL scout three years ago that Richardson would be released twice by age 25.

The Colts—who released him last March—gave up after just a year an a half of Richardson, despite way overpaying for him. But that the 3–13 Raiders released him before the season even starts, likely signals the end of a once-promising career—and his inclusion as the next bust in a long line of NFL failed careers.

If it is, Richardson would be an unusual bust in that his ending doesn’t seem to involve drug abuse, injuries, troubles with the law, or major red flags in the character department. Scouts were just wrong about him.

The former Alabama star averaged just 3.3 yards per carry in his three-year career, despite plenty of opportunities to shine. He made 37 starts for the Browns and Colts from 2012 to 2014.

The Jets: Better Off With Fitzpatrick?

All were impressive in college and seemed to have the talent to star in the NFL, yet for different reasons, they never fulfilled the expectations put on them.

Rarely did someone look so good in college and then perform so poorly in the pros. Even busts like QBs Andre Ware and Tim Couch were mainly highly thought of due to the pass-heavy offenses they starred in during college—as opposed to any raw talent shown in workouts.

That’s not to say that Alabama didn’t like to run the ball when Richardson was there. The Crimson Tide won BCS titles in two of Richardson’s three years, and the big running back ran for more than 3,000 yards in his time there.

But it’s not like the Tide ran the extreme run-heavy offenses of the 1970s and ’80s like the wishbone that Oklahoma ran or Nebraska’s option offense. The Tide still had a balanced offense and Richardson was the star of it.

Richardson may resurface somewhere else in the NFL still, but it’s hard seeing him having the success he was once projected to have.