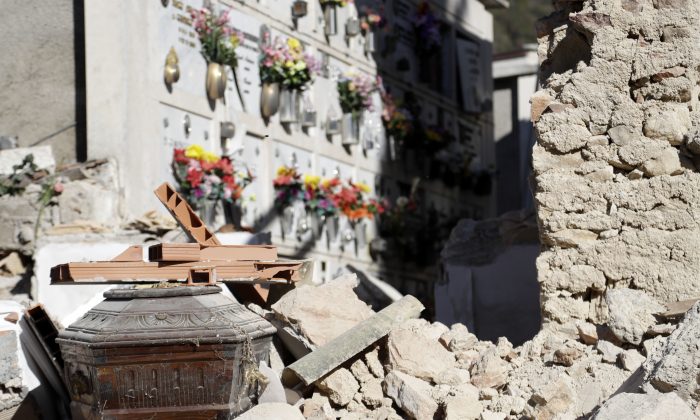 A view of the destroyed graveyard of Campi, central Italy, Monday, Oct. 31, 2016. The third powerful earthquake to hit Italy in two months spared human life Sunday but struck at the nation's identity, destroying a Benedictine cathedral, a medieval tower and other beloved landmarks that had survived the earlier jolts across a mountainous region of small historic towns. (AP Photo/Gregorio Borgia)
Europe

ROME—Dozens of minor earthquakes have continued to shake central Italy, where a big tremor on Sunday devastated towns in the mountainous region northeast of Rome.

The national geological institute reported Tuesday dozens of tremors overnight between Monday and Tuesday, with a relatively powerful 4.7 magnitude quake around 0800 GMT.

There were no reports of major new damage, though the larger tremor was reportedly felt as far as Rome.

The latest quake comes as Italian authorities try to find housing for the newly homeless. Civil protection officials say the number of people needing housing has risen by 15,000 since last week, a figure that does not include the 2,000 who remained displaced from a deadly quake in August.

Italy observes the public holiday of All Saints on Tuesday.