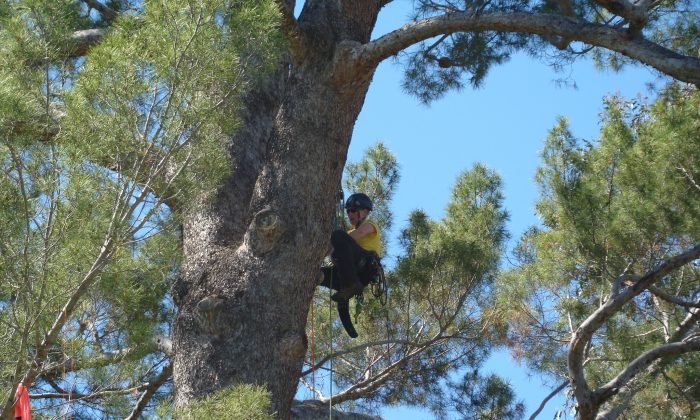 Krista Strating competes in the North American Tree Climbing Championship in Pasadena, California, in April, where she won first place in the women's division. (International Society of Arboriculture)
Canada

Canadian competes in world championship in Wisconsin
By Justina Reichel

Scaling a 40-foot rope and performing a simulated treetop rescue are some of the feats Canadian arborist Krista Strating will attempt at the International Tree Climbing Championship in Wisconsin this weekend.

The competition pits about 60 arborists from around the world against each other in 5 climbing events to test their agility, speed, and technique—as well as their knowledge of tree protection and safety—while raising awareness about their unique profession.

It is the fifth time Strating, who hails from Hamilton, Ont., will compete in the event. And coming off a first-place win in the North American Tree Climbing Championships in April, she thinks her chance of being crowned the world’s best female tree climber is pretty good.

“I’m feeling confident. Winning the North American [title] boosted my confidence quite a bit in knowing that I can do it,” says Strating, who can climb a 60-foot tree in about 30 seconds.

Strating never planned on becoming a professional tree climber. She was working as a landscaper when her former boss approached her with an offer for an arborist job. She didn’t know what to expect but once she tried it she was hooked, and started competing in climbing events soon after.

It’s no surprise that her favourite event in the championships is the “work climb,” which mimics many of Strating’s day-to-day responsibilities—ascending, pruning, navigating, and descending a tree.

Though she admits to having a strong competitive streak, she says the International Tree Climbing Championship (ITCC) is more about bonding between contestants and showing respect for the profession.

“The camaraderie between all the climbers—some of them you may not have met before, but right away you’re on the same level and you know you have this common bond and respect for each other,” she says.

“It’s competitive, but at the same time everybody helps each other. There’s no trying to disadvantage anybody. You’re all trying to do your best.”

Sara Reid, vice-president of communications for the Davey Tree Expert Company, which has sponsored the ITCC for the past 16 years, says the event is “an opportunity to see how the best climbers in the world go about their job, how they make it professional, and how they do it safely.”

Most people don’t know much about arborism (aka tree surgery) or that tree climbing is a sport, says Strating. Many assume it’s part of lumberjack-style timber sports such as chain-sawing or log-rolling competitions. A key difference is that tree climbers aim to preserve and protect the trees as much as possible, not cut them down.

“We don’t use chainsaws, we don’t have any sharp objects on us, it’s all just climbing the trees,” she says. “We do the least amount of damage to the trees so that when we’re done we can walk away from the park without having damaged it.”

Physical fitness is a key factor in the competition but staying calm and “not psyching yourself out” are equally important, she says.

“A lot of people get really nervous—they over-think things and they don’t resort to the fact that they do this every day.”

Strating hopes more people, especially females, will get involved in tree climbing as there is always a shortage of participants in the women’s competitions. She works as a part-time instructor at Humber College in Toronto and always encourages her students to get involved.

“A lot of them are intimidated and don’t feel that they have enough skills to compete, but it’s not even about that, it’s about learning new things by watching others climb,” she says.

“I’m trying to put the word out there to get more people interested, and then more people will come to watch it so they understand what we do.”