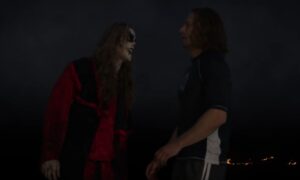 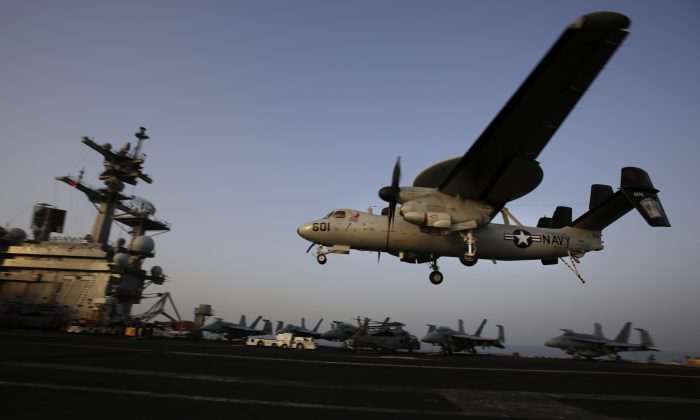 An aircraft lands after missions targeting the Islamic State in Iraq from the deck of the U.S. Navy aircraft carrier USS George H.W. Bush in the Persian Gulf on Aug. 10, 2014. (AP Photo/Hasan Jamali)
Opinion

The Obama administration compares ISIS to cancer, and the analogy offers insights into defeating the extremists

LOS ANGELES—The spate of attacks led or inspired by the Islamic State from Europe to Jakarta has upended confidence that governments around the globe have effective strategies to defeat the terrorist movement. Pessimism persists despite a series of military defeats and economic blows for ISIS in Syria and Iraq.

Reflecting public anxiety, President Barack Obama acknowledged in 2015 that “many Americans are asking whether we are confronted by a cancer that has no immediate cure.” In 2016 interviews, U.S. Secretary of Defense Ashton Carter compared the ISIS base in the Middle East to a tumor, demonstrating the cancer analogy had embedded in the administration’s thinking: “There are metastases elsewhere—Libya, Afghanistan…”

New Social Media Push From ISIS Falls On Its Face

The analogy, while sobering, offers a useful way to think about  the strategies to challenge the Islamic State. Born as al-Qaeda in Iraq, AQI, the rebranded movement occupies regions in Syria, Iraq, and Libya and is spreading “cells” much like a metastasizing disease. Extending the metaphor opens the door to looking to cancer treatment protocols themselves—those that eviscerate, starve, and immunize—to defeat the international scourge.

Which to choose from—radical or limited surgery, radiation therapy or chemotherapy, angiogenesis inhibitors that starve tumors, immunologic techniques or stem-cell infusion to build barriers to cancer rebirth, or several in combination? Washington’s recent wars in Iraq and Afghanistan provided less than satisfactory outcomes, and that portends low expectations and little tolerance for a repeat of “invasive surgery” by the American people. Use of other treatment protocols holds promise, but will ultimately fail unless buttressed by stem cells—infusion of good governance to prevent relapse—and immunotherapies to prevent new ISIS-like cancers from breaking out. Let’s elaborate on the analogy.

The Obama team compares ISIS to a cancer—and that may lead to strategies for defeating extremists.

Radical surgery: The 2007 commonly referred to “surge” infused 20,000 U.S. forces on top of the 140,000 legacy troops then in Iraq. The goal was to stamp out AQI. In radical cancer surgery, success requires the excision of all malignant tissue including the primary tumor and enough of the surrounding tissue to ensure no residual cancer cells remain. Working with Sunni tribesman, the surge achieved much of the objective and eliminated Abu Musab al-Zarqawi, AQI’s leader. Some 2400 followers were killed, and 8800 others were taken prisoner while about 700 residual cells beat the dragnet and metamorphosed into ISIS.

Outpatient surgery: Much like removal of a skin cancer, this far less invasive surgery inserts small units of Special Forces to remove senior ISIS personnel and documents from the battle space to gather intelligence to make other treatment protocols more effective.

Radiation therapy: Just as radiation therapy can reduce the size and spread of a cancer, airstrikes may be helpful in destroying ISIS tumors—foot soldiers and commanders along with training, communication, and storage facilities. Despite some success, the tack has proved to be an insufficient knockout protocol.

Chemotherapy: The infusion of Kurd and Iraqi government ground forces to take and hold communities, combined with airstrikes, quashed ISIS tumors in cities and towns like Kobani, Sinjar, and Ramadi. Unfortunately side effects from the use of local troops resulted in abuses including population expulsions, land grabs, and looting and raised questions whether victory of this sort simply opens the door to rebirth of new extremist cancers.

Angiogenesis inhibitors: Just as angiogenesis inhibitors decrease blood-vessel growth that feeds cancer cells, a protocol that stems new foreign fighters and military equipment, financial and commercial transactions that nourish ISIS tumors has proven feasible but not a game-changer. ISIS developed roundabouts—routes for smuggling oil, agricultural produce, phosphate, antiquities, and other goods through Turkey to fund the movement. In ISIS-controlled territory new finances are bolstered by taxation of locals, confiscating properties, kidnappings, extortion, narcotics, and sale of goods to the Syrian government.

Unless stem-cell and like therapies—good governance—follow, elimination of ISIS may be a mirage.

Together these strategies have weakened the Islamic State. But, critically, unless stem-cell and immunological therapies follow, elimination of ISIS or like cancers is a mirage.

Stem-cell therapy: After cancer cells are destroyed by a combination of treatment protocols, patients receive an infusion of stem cells, bone-marrow derived, providing for clean growth of normal, untainted tissue. The analogy would be establishing good or fair governance into the liberated communities where only corruption and decay had existed before. However, Baghdad’s Shia government’s promotion of sectarian discrimination in the past raises concerns about governance.

Unless this narrative changes—unless the central government halts arbitrary detention of Sunnis and overbearing occupation of liberated communities without granting local populations the right to manage local affairs—the rebuilding of infrastructure that has begun in several communities will not be enough to prevent the cancer’s reemergence. Much as physicians watch over the recovery of cancer patients, international monitors in Iraq could observe and mediate disputes within the liberated areas and between the communities and Baghdad.

ISIS’s Next Attack Could Be With Chemical Weapons

Syria presents a more daunting challenge. There is no defined political entity in this region that can be trusted to generate healthy stem cells. Rather, with the country completely broken, the risk of sectarian and political cleansing is ever present. Once the international community arrives at a consensus about Syria’s future, international peacekeepers could provide the stem-cell infusion to tap down acrimony, uphold ceasefires, and promote local and regional governance.

Immunotherapies: Preventing relapse is not the end of the story, and new cancers must be prevented by applying immunotherapies. Vaccines stimulate an antibody response that binds to cancer cells and kills them. Others stimulate the production of white blood cells to work against cancer’s proliferation.

Anonymous, a loosely associated group of Internet vigilantes, after the Paris bombings applied a “binding” approach to take down ISIS Twitter feeds and websites. Twitter itself has taken down 125,000 ISIS-affiliated sites while Facebook and YouTube are stepping up their diligence. France relies on counselors and others from the Muslim religious community to challenge radical Islamic proselytizing in French jails.

Thinking about ISIS as a cancer organizes strategy, and each element is critical to success.

Unfortunately, each approach suffers from deficiencies and generates concerns. The success of Washington’s Center for Global Engagement for generating thematic campaigns to drive third-party content is uncertain. Arab media send mixed messages, critical of ISIS on the one hand while highlighting sectarian divisions that nourish the terrorist movement on the other, and the Saudi program instills its own orthodoxy. Commentators call Britain’s Prevent insufficient as ISIS continues to recruit in the U.K. France’s program to stem radicalization of Muslims in prison remains a work in progress. All the while, the ISIS web campaign continues to propagate. In the battle of ideas, immunotherapy cannot give up.

Thinking about ISIS as a cancer clarifies the challenges and organizes treatment protocols. The strategies proposed here mark a roadmap to defeat ISIS and prevent relapse. Each element is critical to success. As with the management of the human disease, the task ahead will be difficult. Fortunately, history finds that over time honing the treatment protocols can win the war against extremism.

Bennett Ramberg (Ph.D., Johns Hopkins; J.D., UCLA) served in the Bureau of Politico-Military Affairs in the U.S. Department of State in the George H.W. Bush administration. Copyright © 2016 YaleGlobal and the MacMillan Center. This article was originally published on YaleGlobal Online.