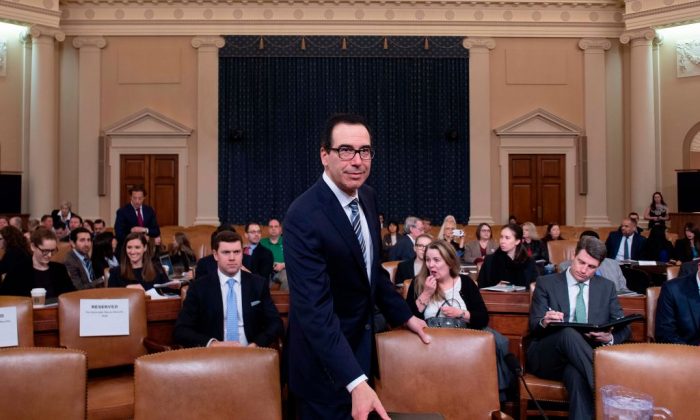 WASHINGTON—Treasury Secretary Steven Mnuchin defended the Tax Cuts and Jobs Act at a congressional hearing on Mar. 14 and rejected the arguments that it is “short-term sugar high.”

Trump unveiled his third budget resolution on March 11, titled “A Budget for a Better America: Promises Kept. Taxpayers First,” calling for significant cuts to both discretionary and mandatory spending. The proposal aims to cut the deficit by about $2.7 trillion over 10 years and balance the budget in 15 years.

In addition, the budget assumes 3 percent annual growth over the next decade, relying on the assumption that the deregulation and tax cuts will continue to provide a long-term boost.

Mnuchin argued that the administration’s economic measures have helped fuel the growth, and that would have a positive impact on the nation’s debt and deficits going forward.

“During the last administration, analysts predicted that 2 percent growth was the highest America could achieve and that it was the new normal,” he said. “We have already shown that we can and will do better.”

Over the next 10 years, he noted that the economic policies would pay for the costs of the tax cuts.

“Whether tax cuts pay for themselves or not will be simple math; 35 basis points of additional growth over the 10-year period is what it takes,” Mnuchin said. “So time will tell.”

Democrats, however, call Trump’s tax cuts a “sugar high” and blame them for ballooning the deficit and nation’s debt.

“I want to be clear that these tax cuts have not had the miraculous economic effect that the administration would have us believe,” Ways and Means Chairman Richard Neal (D-Mass.) said in his opening statement at the hearing.

“But, at best, the tax cuts were a short-term sugar high.”

Speaking at the House Budget Committee hearing on March 12, Russ Vought, acting director of the Office of Management and Budget, acknowledged that tax cuts have increased the deficit and debt in the short-term but added that the fiscal picture would improve as a result of economic growth generated by Trump’s policies.

He said federal revenues hit an all-time high in fiscal year 2018. And according to the president’s budget, tax revenues are projected to rise every year.

“The problem is not that American tax is too little; it is that Washington spends too much,” Vought said.

“In the 1960s, we had spending and taxes as a percentage of GDP roughly in the 16 percent range.

The White House wants to tackle the nation’s “unsustainable” national debt, which almost doubled under the Obama administration and now stands at more than $22 trillion. If nothing is done, interest payments on the national debt will exceed military spending by 2024, according to the White House.

Fiscally irresponsible spending bills, coupled with the Great Recession, boosted the debt dramatically over the past decade. And at the end of the 2018 fiscal year, the amount of public debt reached 78 percent of gross domestic product.

The latest economic outlook by the Congressional Budget Office (CBO) shows that if spending continues to rise, the federal deficit and the national debt would reach alarming levels, causing a fiscal crisis in the United States.

The CBO estimates that public debt will rise steadily over the next decade, reaching 93 percent of GDP by 2029—a higher level than at any time since just after World War II.

During the hearing, Mnuchin blamed Democrats for large spending increases last year. Congress passed a two-year spending bill in February 2018, raising the budget caps by nearly $300 billion for the 2018 and 2019 fiscal years and increasing the debt ceiling. It was the second-largest spending increase in a decade.

At a congressional hearing on March 12, Rep. Rob Woodall (R-Ga.) touted the president for sending a budget to Congress that is projected to balance in 15 years.