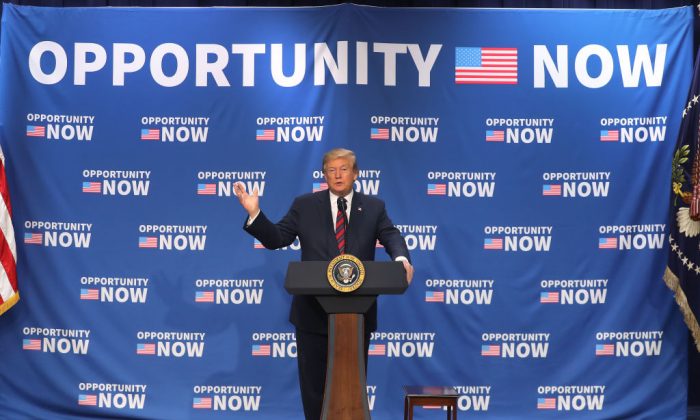 WASHINGTON—Investors and real estate developers who have been long waiting for new guidance on opportunity zones have finally gotten some clarification from the government. While some questions remain unanswered, the new rules provide enough flexibility and clarity to boost investments in underserved communities, a lawyer said.

On April 17, the Treasury Department issued the second tranche of proposed regulations related to the opportunity zones, a new incentive introduced with the Tax Cuts and Jobs Act. The 169 pages of new regulations clear up some confusion and ease some of the previously suggested rules.

“The speed at which they implemented proposed changes is a bit faster than was expected,” he said. The new rules are “more attractive to investors than we had expected this round to come out.”

According to Lore, while there were plenty of unanswered questions, the Treasury provided a strong set of clarifications that would help boost investments.

Through tax breaks, the opportunity zones program incentivizes private investors to invest in economically distressed communities. And the proposed rules provide guidance on how investors such as private equity funds or real estate funds can qualify for special tax breaks in designated opportunity zones.

The third and final tranche of rules will be published early this fall, according to Housing and Urban Development Secretary Ben Carson.

Speaking at the Opportunity Zone conference with state, tribal, and community leaders at the White House on April 17, President Donald Trump said the provision in new the tax code “gives businesses a massive incentive to invest and create jobs in our nation’s most underserved communities.”

In summer 2018, the Treasury Department certified 8,761 U.S. census tracts as opportunity zones, based on nominations received from each state.

“In order to revitalize these areas, we’ve lowered the capital gains tax for long-term investment in opportunity zones all the way down to a very big, fat, beautiful number of zero,” Trump said.

The program allows investors to defer taxes on capital gains, if the gains are reinvested in a qualified opportunity fund, an investment vehicle created to invest in any of these designated zones.

So far, much of the money funneled into opportunity zones has gone toward real estate investments. This is partially due to the lack of clarity around investing in operating businesses, such as start-ups and manufacturers.

“A lot of people look at the real estate opportunity,” Treasury Secretary Steven Mnuchin said at the Opportunity Zone conference. “But what we’re very excited about is the opportunity to create new businesses or expand existing businesses in opportunity zones.”

The initial guidance stated that 50 percent of the sales or gross income of a business must be derived from within the opportunity zone to qualify for investment. This meant that businesses with only local operations such as dry cleaners or small retail stores would be able to meet that requirement. And that was not the intent of the legislation.

“This was one of the things that we did receive a lot of comments on,” Mnuchin said.

In order to create more investment flexibility, the Treasury introduced a multipart test.

According to Lore, the new guidelines provide flexibility by introducing “generous and fairly mechanical safe harbors” to determine whether sufficient income is derived from a business in a qualified opportunity zone. Rather than just looking at sales numbers, the new guidance allows looking at other metrics such as hours by employees expended in opportunity zones.

However, the biggest issue, which is related to the reinvestment of interim gains still remains.

Investors want the IRS to permit opportunity funds to reinvest interim gains in other opportunity zone assets without triggering a capital gains tax. However, current regulations do not provide such flexibility.

“That’s still something we’re looking at,” Mnuchin said, adding that there are both legal and policy issues with respect to reinvestments.